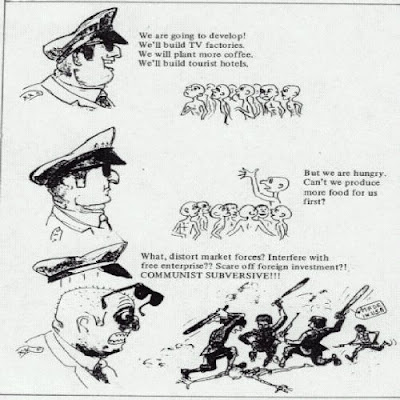 From the BBC we hear that Aliko Dangote may be the richest man in Africa .

Mr Dangote has come along way from his early days of trading commodities in his home town of Kano in the north and now has listed two of his 13 companies on the Nigerian stock market. His stake in those two alone is worth more than $4 billion (£2 billion). His business empire spans the economy. He dominates the markets for sugar, cement, rice, pasta, textiles and salt, and he is big in transport, oil and gas.
In politics, as in business, he is also a powerful player. He is not ashamed to be financially supporting President Olusegun Obasanjo's ruling People's Democratic Party .

"I am close to people in government because I am one of the big businessmen in Nigeria," he explains. "If we don't have the right people there then [all the] money I have is useless..."

As Marx said the State is the executive committee of the capitalist class and Aliko Dangote fully recognises this . The Nigerian government is HIS government .

Whereas for the other 140 million Nigerians , the majority of who live under a poverty line of less than a dollar a day, in the words of Femi Kuti , son of legendary Afrobeat musician and political activist Fela Kuti:-

"People are poorer, things in the market are getting more expensive, life is getting more difficult by the day."

And his verdict on politicians vying for election :-

"...when these people get into power they never fulfil their promises. You see them with their big cars, they buy houses in England or America, they give their kids the best education, but the crop of the people, the masses themselves, they lose."

Since independence from Britain in 1960, an estimated $400 billion of oil revenues have gone missing, presumed stolen, by the military and political elite.

Nigerians are used to being let down by their governments and sooner they realise that the existing Nigerian political parties do not represent their interests but are bought and paid for by the likes of Aliko Dangote to protect and preserve his privilege and wealth .

Posted by African Socialist at 8:53 PM

I linked to this blog.