The report, "The State of Africa's Children 2008," was launched on May 28 at the Fourth Tokyo International Conference on African Development in Japan.

The facts are shocking.

Although Africa accounts for only 22 percent of births globally, half of the 10 million child deaths annually occur on the continent. Africa is the only continent that has seen rising numbers of deaths among children under five since the 1970s.

Many of these children die of preventable and curable diseases.

UNICEF's report says malaria is the cause of 18 percent of under-five deaths in Africa. Diarrheal diseases and pneumonia -- both illnesses that thrive in poor communities where sanitation is severely compromised, and where residents are often undernourished and exposed to pollution -- account for a further 40 percent of child deaths. Another major killer is AIDS.

sub-Saharan Africa is unlikely to achieve any of the health-related Millenium Development Goals by 2015; the continent lags behind on progress towards eradicating extreme poverty and hunger, improving maternal health, and halting and reversing the spread of HIV. One in every six children in sub-Saharan Africa will still die before his or her fifth birthday. The region is described by UNICEF as the most difficult place in the world for a child to survive.

In South Africa, 250,000 children under 15 are HIV-positive -- a huge proportion of the estimated 400,000 children under 15 who have been infected with HIV in Africa. Despite the expanded provision of anti-retroviral drugs, 64,000 more children contract the virus in South Africa each year. Across the southern African region, under-five deaths have risen by 17 percent between 1990 and 2006; these deaths are mostly attributed to HIV/AIDS.
In West and Central Africa, there were more people without access to clean drinking water in 2004 than in 1990. Unsafe drinking water can cause diarrhea, dysentery, and other water-borne diseases.

There can be expanded immunization programs, the increased use of insecticide-treated bed nets, and the provision of vitamin A supplements to children.
Other interventions in Africa include exclusive breast-feeding practices up to six months and the prescription of anti-retroviral medication to prevent mother to child transmission of HIV.
In Ghana, all pregnant women are now covered by an intervention program that includes iron and folic acid supplementation and preventative treatment for malaria. All children between six months and five years of age are vaccinated against childhood diseases like measles and polio.
In Malawi, the government has rolled out immunization programs as well as micronutrient supplementation -- small amounts of vital minerals like iron, cobalt, chromium, and copper. The government is also building wells to improve access to clean water for people living in remote towns and villages.
Rethinking the supply and management of water systems is also crucial. In Ghana, a water reform program introduced in the 1990s has met with huge success. Responsibility for water supplies was transferred to local governments and rural communities and by 2004 access to clean water sources had increased to 75 percent from a low 55 percent.

Just imagine if there were no financial budgets acting as restraints on peoples needs and that the labour hours spent on wars and State oppression were re-directed to constructive and not destructive purposes.
Posted by ajohnstone at 5:17 PM No comments:

The Sudan government and rebels from the south signed the accords making up a peace deal to end 21 years of fighting. The agreement included a permanent ceasefire, and protocols on sharing power and wealth. The conflict - Africa's longest-running civil war - had pitted the Muslim north against Christians and animists in the south, leaving some 1.5 million people dead.

Yet was it all to do with religion and Sharia Law ? The latest news from south Sudan describes scavenger birds picking through the charred remains of houses and shops in the central Sudanese town of Abyei, four days after violent clashes between troops from the North and South of the country ended. tens of thousands of people fled from the town and surrounding area to escape days of sporadic fighting. Looters steal what they can , the northern soldiers who now control the town stand looking on.
"We have been to the centre of Abyei and it doesn't exist any more," said the head of the UN mission in Sudan, Ashraf Qazi.

Border demarcation and the status of Abyei were at the heart of the problems.

Both North and South are desperate to have Abyei inside their borders because of the oil fields that surround the town.

Once again , war comes down to the mundane competition for resources and religion used as camoflage to justify rivalry and delude people into dying for oil .
Posted by ajohnstone at 11:35 AM 1 comment:

From the BBC we read that six million children in Ethiopia are at risk of acute malnutrition following the failure of rains, the UN children's agency, Unicef, has warned. The WFP estimates it needs to raise $147m (£75m) to tackle Ethiopia's needs. Aid workers say the money just is not arriving, with donors concentrating on the disasters in Burma and China.

Ethiopia for most of the past three decades has survived on millions tonnes of donated food and millions of dollars in cash. It has received more emergency support than any other African nation in that time. Its population is increasing by 2m every year, yet over the past 10 years, its net agricultural production has steadily declined. Even in good years, some 5m people need food aid just to survive.

Why, with so much international support, have things gotten worse and not better?

Foremost is that any large-scale intervention by definition distorts local economics.
"We import huge amounts of grain from abroad. So this will inevitably affect the internal production and markets," said the Deputy Prime Minister Addisu Legesse.
When foreign aid lands, local prices collapse, and farmers who have managed to produce a surplus find their crop is virtually worthless. They have no money to pay for seed or fertiliser for the following year.
Posted by ajohnstone at 7:55 AM No comments:

One Class , One Struggle

Companion bloggers The World Socialist carries an article that has been often commented upon here on the Socialist Banner - the rise of xenophobia in South Africa - the search for scapegoats for the failure of the ending of the apartheid era and the ANC government to satisfy the material needs of those who put their faith in the promise of change .
Posted by ajohnstone at 6:38 AM No comments:

"We have a water problem"

You have to buy water or you have to draw water yourself… We get water from far away, because if you are getting it from up there at Chemichemi springs…everyone is at that place… It is just a ditch and that ditch used by all the people in this area. Everyone has to form a line and it takes many hours...If you do not have water, you have to pay 300 shillings and that represents school fees, so we have a water problem. There are those people who have dug wells and there are those who have taps, so it depends on your ability [to pay]… If you have money, about 10,000 shillings, you can connect pipes to your house.The tap water comes on in one area at a time. For example, it may be available in the part with the hospital, but there is none this side [of Kimana] - but we understand… I have neighbours whom God has helped and they have tap water and also pumped water. They sell it. One container is 2 shillings. You are forced to buy it - if you do not want the water from the ditch you have to buy it.

Posted by ajohnstone at 11:39 PM No comments:

Socialist Banner has previously reported upon the African brain drain and especially in the health service sector ( here and here ) . Freedom Press have produced an article which is worthy of a re-post .

Rob Ray looks at claims that a brain drain to West is crippling healthcare across the African continent, for Freedom Press

It has been revealed that the global shortfall in healthcare professionals has reached four million people – with one million needed in Africa alone. The figures were voiced at the Global Forum on Human Resources for Health, which opened in the Ugandan capital of Kampala on March 3rd.
Poor working conditions in Africa, along with heavy incentives from the West, are drawing a heavy proportion of newly-trained health professionals out of the continent. Some 57 countries, especially in Africa and Asia, are particularly affected and unable to effectively provide health services for the population, which also hampers prevention and information campaigns, drug distribution and other life-saving interventions.

Africa has been particularly badly hit as measures from wealthy countries to encourage skilled workers to emigrate have stripped African countries, particularly in sub-saharan regions, of up to 75% of their physicians (Mozambique) and up to 82% of nurses.

"They seek better employment and quality of life. Income is an important motivation for migration [as well as] better working conditions, career opportunities and more job satisfaction," Sigrun Mogedal, one of the conference organisers, said.

Across the continent, Africa has 11% of the world population and 24% of the global burden of disease, but only 3% of the world’s health workers. Nine countries, including Britain, the US, France, South Africa, Belgium, Spain, Canada, Australia and Portugal, received the vast majority of all migration from Africa – 92.4%, amounting to over 65,000 people in the year 2000 (the most recent figures available).

Britain has been particularly active in Kenya, recruiting the vast majority of the 51% of healthcare workers which have left the country, leaving many of those injured in recent fighting around the elections unable to find medical help.

Uganda is facing an acute shortage as there is only one doctor for every 15,000 patients, far below the recommended 1.5 per 10 patients. Last October, the Ugandan Ministry of Health reported a staggering shortfall of 2,290 nurses out of the required 5,568 in government funded hospitals alone.

While money is often sent back to the country by healthcare workers abroad, the absence of proper healthcare is contributing to a catastrophic fatality rate. The Global Health Workforce Alliance said one in four doctors trained in Africa was working in western industrialised countries.
Posted by ajohnstone at 1:50 AM No comments: 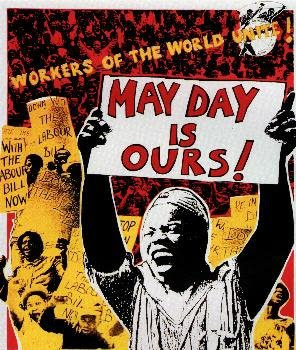