May Days in South Africa 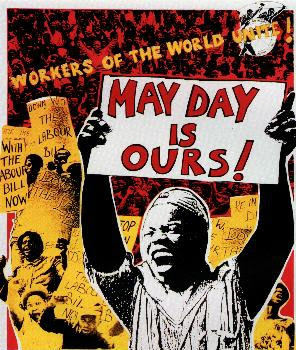 May Day has arrived and i happened to come across this article about the history of May Day in South Africa which i found interesting .
"...the opening stanza of the socialist anthem, The Red Flag - "The people's flag is deepest red. It shrouded oft our martyred dead" - applies very much to South African May Day struggles But elements of those struggles have sometimes been buried by trade unionists and by supportive political parties and groups because, with hindsight, they appear embarrassing. Some early May Day struggles were, for example, tarnished by calls for racial dominance; others were sullied by political machinations...
...Radical migrant workers brought this tradition to Johannesburg's gold fields. And it was a group of such migrants who staged the first recorded South African May Day rally in the city's Market Square in 1904.
May Day 1912 saw an attempt to form a United Socialist Party "without discrimination as to race, colour, sex or creed". This attempt failed, but the spirit lived on. In 1919 trade unions briefly seized control of Johannesburg, and black and white workers marched together in the May Day demonstration in the city.
But this embryonic unity was shattered by the 1922 revolt of white workers in favour of job reservation and privilege for whites on the mines. In a situation of virtual civil war, a notorious and contradictory slogan emerged: "Workers of the world unite - and fight for a white South Africa." At best on the basis of "with the workers, right or wrong" against the mining tycoons, some white socialists and members of the embryonic Communist Party supported this racially motivated struggle.
Only with the economic collapse of 1929 were there again stirrings of worker struggle centred on May Day, and a United May Day Committee (UMDC) was formed to organise a rally in Johannesburg in 1931. But the UMDC said that "coloured" workers could not participate. In response, an African May Day Committee was established, headed mainly by independent socialists. On May 1 1931, it rallied an estimated 3 000 black and half as many white workers in Johannesburg's Market Square. They marched on the small UMDC meeting on the city hall steps and overwhelmed it. Chanting: "We want work, we want bread" and singing the Red Flag, the united march swung off to the city's top hotel, the Carlton, and to the Rand Club, haunt of the mining magnates and top business people. The police baton charged, heads were broken, blood flowed and eight marchers were arrested.
The Rand Daily Mail. It described the march as "a bedraggled procession in which dirty-looking natives of the lowest class marched shoulder to shoulder with Europeans, many of them of obvious low mentality". The newspaper added: "The breaking down of the social barrier between black and white is a serious development that cannot be lightly regarded … The white Bolshevik is bad enough. The black one is unthinkable."
In 1950, a May Day stayaway called by the SA Communist Party was initially backed by the ANC. But with the ANC Youth League in opposition, the ANC withdrew its support. However, thousands of workers heeded the call and there were rallies in Soweto, Bloemfontein, Cape Town, Durban and Bethal. Once again, the police cracked down and 18 workers were killed.
For the next 15 years, there were sporadic, small commemorations of May Day before intensified state repression snuffed out public commemorations. But among a core of trade unionists and political radicals, the memory of May Day was kept alive and when the mass of workers again began mobilising, especially after the 1976 student uprisings, the idea of the day again took root. There were several small May Day meetings in 1982 and 1983 and, in Cape Town's Athlone stadium in 1984, an estimated 3 000 workers gathered on May 1st.
In the wake of transformation, May Day rallies tended to be more celebratory of the victories achieved. Many took the form of picnics.
But mass unemployment, increasing wage and welfare gaps, casualisation and a perceived lack of service delivery has increased disquiet in many working-class areas. The May Day slogans have also become more strident, so the commemorations, this year or next, may provide some inkling of any storms in the offing."
Posted by ajohnstone at 1:15 AM

Email ThisBlogThis!Share to TwitterShare to FacebookShare to Pinterest
Labels: May Day, South Africa