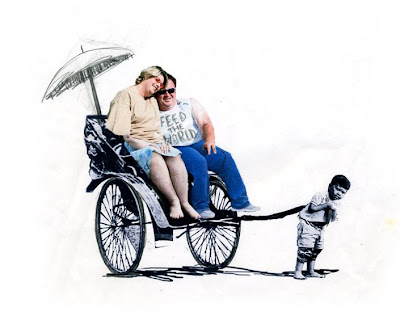 The historic slave port ,Badagry, Nigeria , is to be transformed through the bizarre combination of a $3.4bn (£2.4bn)slave history theme park and a museum dedicated to double Grammy-winning pop-soul group the Jackson Five. The idea is that the band will help attract African-American tourists keen to trace their roots back to Nigeria.
The African-American history trail is worth billions of dollars, the developers say. Ghana and Senegal have successfully turned slave ports into tourist attractions. The developers say the Badagry Historical Resort will be marketed to African-American tourists as a mixture of luxury tourist attractions and historical education.
Visitors will be able to see the route their ancestors walked, shackled together as they were whipped toward the "point of no return". They can then retire to their five-star hotel to drink cocktails by the pool.
But critics have dismissed the project as a cynical money-making scheme, inappropriate for the subject of such seriousness as the transatlantic slave trade.
"It's like dancing on the graves of dead people and telling them you're honouring them" C Don Adinuba Writer

Posted by ajohnstone at 1:43 PM