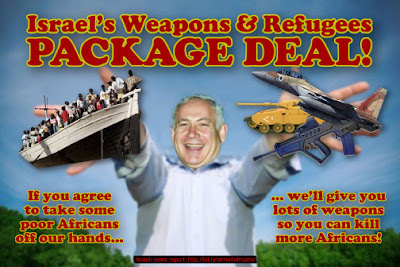 Ynet reports that the government is close to inking a deal with three African states (who are likely Ethiopia, South Sudan, and Uganda) who will take “tens of thousands” of ‘undesirable’ African refugees from Israel in return to Israeli weapons and training.  Isn’t that neat and tidy!?  Israel gets rids of what Israeli politician  Miri Regev called a “cancer in its midst” and contributes to the rising tide of mayhem and violence in countries like South Sudan and Eritrea, already beset by instability and civil war.

The Israeli government revealed there are 7,000 registered arms merchants plying Israeli weapons to precisely these sorts of unstable states, making Israel the sixth largest arms merchant in the world.
Posted by ajohnstone at 4:07 AM