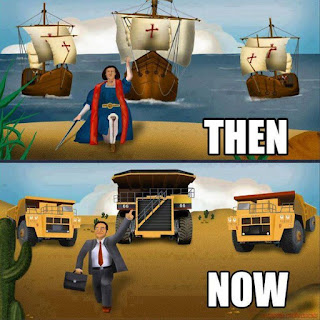 Africa is a vast continent comprised of nations which because of their colonial past have different histories, just as they have variegated geographical landmarks that distinguish them. Thus African nations do not share many things in common except the forcible grouping together of tribes regardless of the interaction that existed before colonialism. It is imperative to note, therefore, that such a situation in which countries find themselves has made nation building and African unity a difficult task. It also means spreading socialist ideas will not be an easy task to accomplish In the attempt to create nations, different ethnic groups have been split between boundaries and the expression of nationalism has therefore not been through the medium of cultural or ethnic identity, but defined within the context of the country in which the language of the colonial master became the lingua franca. It is not surprising then that one can hardly talk of any positive working class thinking here in Africa. With the intensification of exploitation through a massive invasion of all sectors of the economy by capital, the economic situation of both urban and rural folk has drastically worsened. Under the dire circumstances, peasants drift to the towns with the hope of escaping from the hunger and lack of opportunities whilst the urban factory and office workers are preoccupied devising ways and means of pilfering at their workplaces in order to make ends meet. Consequently, many of these frustrated people find it difficult to engage in political activities thus reducing the chances of potential cadres deepening their socialist consciousness. Indeed many, in their attempts to stay alive, finally abandon the political struggle altogether. On the other hand, the very few who are fortunate enough to find well-paid jobs tend to live ostentatious lifestyles obviously influenced by the type of negative western media output that is predominant here in Africa. A good lot of these people, with an imposed insatiable ambition to "make it", prove more injurious to left-wing politics than their poorer counterparts in the working class who cannot afford the luxury of discussing politics.

Certain conditions must be fulfilled before the idea of socialism can arise. Of paramount importance is a developed industrial society in which the propertyless mass of wage-slaves is increasingly forced into the consciousness that its interests are in conflict with those of the owning class. Some workers, hearing us say this, consider the undeveloped and developing areas throughout the world. They see those millions of peasants whose way of life has never changed in hundreds of years and feel that all this renders socialism, if not impossible, something for the distant future. In Africa, the barriers to socialism seem insurmountable. Is it really so hopeless? We think not.

With increasing contact with the modern world brought by the media, mobile phones, and the internet it becomes clear to rural workers that there is more to life than the village can offer. They hear that the earnings for a few hours work in the cities bring a return the equal of many hours of back-breaking toil in the fields. This, or the desire for education, among other reasons, send him into the cities to begin the process of losing their past—that of “de-tribalisation”.  It starts the moment he or she parts from the controls of the tribe and the ties of the village and must adapt  to the new conditions in order to survive, and the changes are great. The traditional life of the village with its protections and comforts are no longer a safety net. New associations must be sought and these usually present themselves at work. New interests are created and when problems arise they may not be treated as personal or tribal but as social issues which demand new thinking. More, these new associates have different Gods from his own—or no God at all—so acceptance of conventional superstition is challenged. To sum up, there is enormous pressure for a re-examination of beliefs, standards, values, and aspirations. At the same time, the contradiction of a wage-worker’s life and the spectacle of immense wealth displayed in stores, shopping malls etc., leads to the understanding of the money economy. What protection is there? The same as anyone else; a trade union.  Today, although still split by factional squabbles, the union movement continues to grow.  This growth in trade union strength has occurred in the face of tribal loyalties and animosities.

Does this mean tribalism is a spent force? Far from it. In fact, it has staged something of a comeback in recent times. Political leaders, jockeying for position and power, are having to invoke all the old antagonisms—although the dangers of this are obvious and recognised. But in the long run, the past will lose out to the demands of the new. Those who have spent much of their lives with the tribe will remain under its influence to some extent, but the generations who know only city life and who receive a uniform education will have little interest in the ancient ties. Those groups who consider themselves different because of nationality or religion will still unite with outsiders for political or economic reasons.

Ultimately, the greatest factor in the development of Africa’s working-class is that it is part of a world economic system, the effects of which it cannot escape.  Africa is advancing to that of an industrialised, class-divided capitalist society. We can conclude that in many poor and less developed nations, working class political consciousness as a precondition for social change does not exist and that politicians can easily take advantage of working class social grievances to lure them into ethnic and tribal animosities. Study socialism to understand how we live and how we can change the way we live. Socialism is the only practical political alternative to capitalism and our message to the workers of Africa remains the same – the creation of a class-free money-free and state-free society. Though the picture looks so gloomy, that does not mean there is no hope. There are several oases dotted around this desert of hopelessness. And especially now that some basic democratic rights seem to be getting the nod from the dictatorships, we only need to keep up the struggle and to give courage to the already liberated.
Posted by ajohnstone at 3:48 AM