Immigrants sent a $38 billion (€31.1 billion) back home to Africa in 2017, according to a new World Bank briefing paper.  Nigeria accounts for the lion's share of this with $21.9 billion, followed by Senegal with $2.2 billion and Ghana with $2.2 billion.

"The [African] diaspora … are making a lot of money and they are willing to share that money with the countries which they first came from," said Africa commentator Ayo Johnson, who hails from Sierra Leone but is based in the UK. "Remittances are going back to their host countries in huge, huge volumes."
Remittances have now become one of the most important external sources of finance for Africa. Numerous studies have found that remittances directly benefit the welfare of those receiving the money. In poorer regions and countries, such payments can often buffer the vagaries of poverty or instability by covering basic necessities such as food, school fees, rent and health care. One of the big benefits of remittances is that, unlike development aid, they flow directly into the pockets of the intended person.
"Remittances are a lifeblood," said Nikki Kettles from Finmark Trust, a South African-based organization working to make financial services more accessible to the poor. She said it was families, especially to women and children, who benefited from remittances in southern Africa where her organization worked. "People working in South Africa send money home, for example, to Zimbabwe, DR Congo and Malawi. People are using the payments to feed or educate, not for other reasons," she said.
In some of Africa's smaller or impoverished nations, remittances are literally keeping their economies afloat.

The money could go further if it wasn't more expensive to send money to Africa than anywhere else in the world, the study finds. It costs more to send money to Africa – the world's poorest region – than anywhere else in the world. This means expensive fees eat up a chunk of cash that could otherwise help the receiving families. The average fees for transferring remittances to Africa was 9.4 percent in 2017 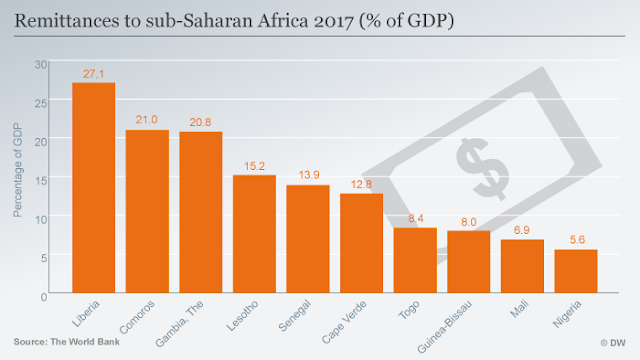 Posted by ajohnstone at 3:31 AM