The Tragedy of Two Worlds 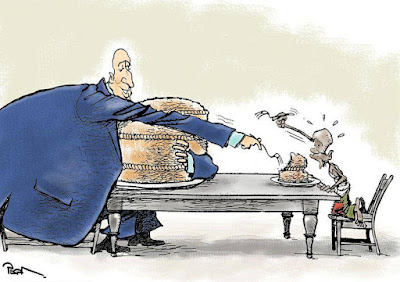 "One person is dying every 48 seconds in Ethiopia, Kenya, and Somalia alone," said Oxfam. "Against this backdrop, food billionaires have increased their collective wealth by $382 billion since 2020. Less than two weeks' worth of their wealth gains," the group calculated, "would be more than enough to fund the entirety of the U.N.'s $6.2 billion humanitarian appeal for East Africa. The appeal is currently woefully funded at merely 16%."

"Food inflation in East African countries where tens of millions of people are caught in an alarming hunger crisis has increased sharply, reaching a staggering 44% in Ethiopia—nearly five times the global average," Oxfam said.

"There have been 62 food billionaires created in the last two years," Oxfam found, pointing to the global food corporation Cargill—one of a handful of businesses that collectively control more than 70% of the worldwide market for agricultural commodities—as a striking case in point.

Cargill is "87% owned by the 11th richest family in the world," Oxfam observed. "The combined wealth of family members listed on the Forbes billionaire list is $42.9 billion—and their wealth has increased by $14.4 billion (65%) since 2020, growing by almost $20 million per day during the pandemic. This has been driven by rising food prices, especially for grains. Four more members of the extended Cargill family have recently joined the list of the richest 500 people in the world."

Hanna Saarinen, Oxfam's food policy lead, said Monday that "a monstrous amount of wealth is being captured at the top of our global food supply chains, meanwhile rising food prices contribute to a growing catastrophe which is leaving millions of people unable to feed themselves and their families."

"World leaders are sleepwalking into a humanitarian disaster," Saarinen warned. "This fundamentally broken global food system—one that is exploitative, extractive, poorly regulated, and largely in the hands of big agribusinesses—is becoming unsustainable for people and the planet and is pushing millions in East Africa and worldwide to starvation."

"We need to reimagine a new global food system to really end hunger; one that works for everyone," said Saarinen.

Posted by ajohnstone at 1:48 AM