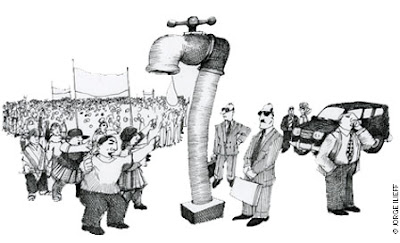 "Despite impressive revenues from oil and diamonds, there has been virtually no investment in basic services since the 1970s, and only a privileged minority of the people living in Luanda have access to running water," said a briefing paper by the international medical charity, Médecins Sans Frontières .

More than half the people living in informal settlements, called musseques, depend on private tankers for their daily water in the oil-rich country. More than 300 privately-owned trucks bring water into the city every day . Raw water is pumped from the River Bengo into the waiting tankers, which then go to a chlorination point, where the drivers buy a container of chlorine and pour into the water before leaving the pumping station. MSF found that many trucks were leaving the station without chlorinating the water, to avoid queuing and make as many round trips as possible. But the 2006 cholera outbreak in Angola in which 67,257 cases were recorded and 2,722 people died - the world's highest fatality rate - shook the authorities.

Development Workshop , an anti-poverty non-governmental organisation found that people living in the musseques were paying private sellers up to 10,000 times more for water than those who were better off and living in the part of city with piped water were paying the provincial water company for treated water.

A family of four in the musseques, earning less than $50 a month, could spend as much as $60 on their monthly water needs. According to Cain, "this often does not include the basic minimum required per person per day - you might find families managing with a 20-litre jerry-can per day".

MSF noted in its paper that the cost of water was determined by market forces. "Water prices are ... subject to speculation and can vary, even on a daily basis, depending on access (distance from the water collection point to the distribution point, and the condition of the road that leads to the final distribution point) and demand (availability of water in nearby areas)".

"It is a business worth several million dollars a year," said Dauda Wurie, the Water and Sanitation Project Officer of the UN Children's Agency (UNICEF) in Angola.
Posted by ajohnstone at 2:42 PM