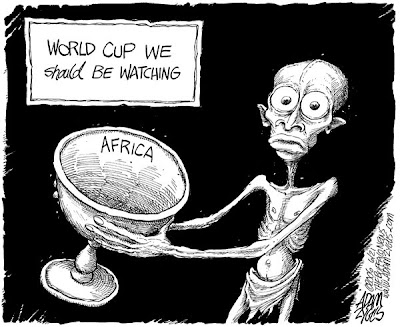 It's all warming up for the World Cup now . We have had the tournament's draw for the sections and we have the homeless being forced from the streets.
Isaac Lewis said that police have arrested him for loitering six times in the past month. Before that, Lewis said police mostly left him alone.
Police harassment he said "is increasing, everyday it's increasing," he said. "It's because they want to make a good impression for the foreigners coming. We are like insects to them, or flies."

Lesley de Rueck, Cape Town's director of 2010 operations, denied the city was pressuring the homeless for the World Cup's sake. Felicity Purchase, a city councilwoman and member of a mayoral committee on economic development and tourism, said that the city wanted to get people off the streets for their own good as well as to keep the city "tidy."

Jason Brickhill of the Legal Resources Center, an independent human rights group based in Johannesburg, stated homeless South Africans in Pretoria and Johannesburg, two of the other cities where the tournament will be staged, are also being arrested by police for loitering, and illegal evictions are on the increase.
"In my mind it's linked to the World Cup . There has been talk of the need to clean up the streets, where the dirt is the people."
Posted by ajohnstone at 7:48 AM