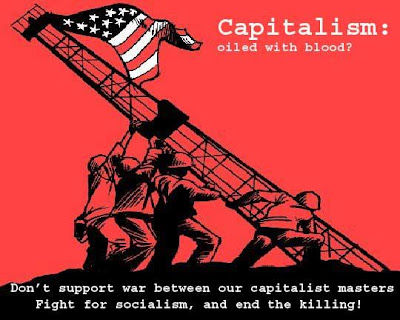 Barack Obama accepts the Nobel Peace Prize and in his speech asserts through war we can achieve peace . He has made similar claims for Africom ."...we stand ready to partner through diplomacy, technical assistance, and logistical support, and will stand behind efforts to hold war criminals accountable. Our Africa Command is focused not on establishing a foothold in the continent, but on confronting these common challenges to advance the security of America, Africa and the world." 11 July 2009 Obama speech in Accra, Ghana.

from here we read

Yet all the available evidence demonstrates that he is determined to continue the expansion of US military activity on the continent initiated by President Bill Clinton in the late 1990s and dramatically escalated by President George W. Bush from 2001 to 2009. While many expected the Obama administration to adopt a security policy toward Africa that would be far less militaristic and unilateral than that pursued by his predecessor, the facts show that he is in fact essentially following the same policy that has guided US military involvement in Africa for more than a decade.

The Obama administration is now considering providing even more military support to the Nigerian government for use in the Niger Delta if the current amnesty programme collapses, as many analysts expect, and the government resumes military operations against insurgent forces in this vital oil-producing region (which produces 10 per cent of America's total oil imports).

And with regard to America's growing dependence on African oil supplies, President Obama understands the danger of relying upon the importation of a vital resource from unstable countries ruled by repressive, undemocratic regimes and the necessity of reducing America's reliance on the use of oil and other non-renewable sources of energy. But, for understandable reasons, he has concluded that there is simply very little that he can do to achieve this goal during the limited time that he will be in office. He knows that it will take at least several decades to make the radical changes that will be necessary to develop alternative sources of energy, particularly to fuel cars and other means of transportation (if this is even technically feasible). And he knows that - in the meantime - public support for his presidency and for his party depends on the continued supply of reliable and relatively inexpensive supplies of gas and other petroleum-based energy to the American people, more than any other single factor. In the event of a substantial disruption in the supply of oil from Nigeria or any other major African supplier, he realises that he will be under irresistible political pressure to employ the only instrument that he has at his disposal - US military forces - to try to keep Africa's oil flowing.

Professional military officers also know that the repressive, undemocratic regimes upon which the United States relies to maintain oil production are likely to fail and that they are almost certain to find themselves sent into combat in Africa - whether they like it or not - if this leads to a major disruption of oil exports, and are already working on plans for direct military intervention in Africa. Thus, in May 2008, the Army Training and Doctrine Command, the Special Operations Command, and the Joint Forces Command conducted a war game scenario for Nigeria during war game exercise that it conducts each year at the US Army War College in Carlisle, Pennsylvania.

The scenario - set in the hypothetical year 2013 - was designed to test the ability of the United States to respond to a crisis in Nigeria in which the Nigerian government fragments and rival factions within the Nigerian military begin fighting for control of the Niger Delta, creating so much violence and chaos that it would be impossible to continue oil production. The participants concluded that there was little the United States could do to bring about a peaceful resolution of the conflict and that, in the end, they would probably be ordered to send up to 20,000 American troops into the Niger Delta in what the participants clearly recognised would be a futile attempt to get the oil flowing again. The fact that the participants in the Nigerian war games decided to go public with this information suggests that they believe that this scenario is likely to become a reality in the near future and that their only hope of avoiding this is to tell the public in the hope that this will prevent the order from being issued.
Posted by ajohnstone at 11:46 PM