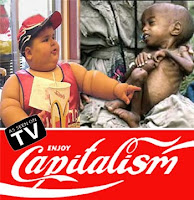 Coca-Cola is one of the largest and wealthiest companies in the world, as well as being one of the world's best-known brands. The desperate situation of the poverty-stricken workers in the sugar cane fields in Swaziland, who harvest the sugar cane that is the most important ingredient of African Coke. Their plight is not deemed newsworthy. They live their lives in a brutal and repressive absolute monarchy where King Mswati III and a small elite live in luxury while the majority of Swazis live in abject poverty.

Over one billion cans or bottles of Coca-Cola are consumed every day and the Coca-Cola Company makes huge profits every year, over $15-billion in 2005.

Due to the lessening of growth potential in Western markets, where the American market had been dropping off since 1984, Coca-Cola has delved into the markets of developing countries, not least in Africa. Here growth potential is higher and competition less fierce. Coca-Cola can be bought all over Africa, where the Coca-Cola Company is one of the largest employers with over 160 plants and nearly 70,000 employees. Coca-Cola has therefore had a huge impact on the economies of both many African countries and their citizens in recent years. Not least in Swaziland, where Coca-Cola contributes over 40 per cent of the country's gross domestic product.

The Coca-Cola concentrate that is the most important ingredient in the Coca-Cola that is consumed in Africa and parts of Asia and Australia comes from a huge industrial plant in Mapatsa, Swaziland. The Coca-Cola Company chose Swaziland because of the favourable tax arrangement that the regime gives it, as well as the country's abundance of cheap labour and raw sugar. The real point, though, is that Coca-Cola is probably in Swaziland because it is a dictatorship that oppresses its unions and population. This allows wages to be kept low and unemployment high. Swaziland has been 'Coca-colonised', so to speak.
'Coca-Cola can blackmail Swaziland at any moment it likes. If it doesn't get its way it simply has to threaten to take its business elsewhere,' as Richard Rooney, a former associate professor at the University of Swaziland puts it.

Coca-Cola has been accused of dehydrating local communities in its pursuit of water resources to feed its own plants, drying up farmers' wells and destroying local agriculture...it takes almost three litres of water to make one litre of Coca-Cola," says English anti-poverty and human rights organisation, War on Want, in a report on Coca-Cola. Coca-Cola and its affiliates have also been accused of abusing 'countless fundamental human rights', according to a HRCI research report, such as anti-union violence, discriminatory practises and union busting. Coca-Cola is certainly happy with their relationship with the autocratic Swazi regime.

Cutting cane is backbreaking work, and accidents are common,' states a 2004 Human Rights Watch report on sugar cane workers. 'Of all forms of agricultural work, sugar cane is the most hazardous.' This certainly also applies to Swaziland, according to the sugar cane workers. In a small village in Vuvulane, most of the adults worked in the sugar fields as casual labourers for between 400 and 550 rand per month. 'This is not enough to pay for medicine, proper food or school fees for our children,' one villager said. 'Sometimes we do not eat for days. We used to have our own vegetable gardens but these were confiscated by the sugar company. We sometimes fish in the nearby dam in the evening, when it is dark. If we are caught we will be arrested as the dam is owned by the sugar cane company,' another villager said. Practically none of the children in the village, who were clad in dirty and ripped clothes and looked underfed, attended school and many of the villagers receive food aid. In addition to this, the water supply is controlled by a privately owned company that readily closes the water supply from the village if they are not paid on time.

Does Swaziland really benefit from having the Coca-Cola Company effectively propping up its royal dictatorship? Yes, the Coca-Cola Company might provide a large part of Swaziland's annual GDP, but what good is this to the impoverished sugar cane worker or the average Swazi who can barely make ends meet? What good is it when much of this GDP ends up in the pockets of a small elite?

Improved consciousness has enabled Swazi workers to link their poverty, poor working conditions and the low wages that the multinationals pay to regime and company neglect and neo-liberalism. And the workers of Swaziland have therefore been more open and clear in their demands in recent years. Examples of this are the massive strikes by over 16,000 underpaid, and frequently abused, (mostly) female textile workers, in 2008, and the recent historically large demonstrations for socio-economic justice and democracy in March and April 2011. Swazi workers might previously have seen their struggle against Coca-Cola and the Swazi regime as akin to David's struggle against Goliath. But recent events seem to prove that they are slowly waking up to the fact that David ended up winning that battle.