There Is No Idle Land In Africa 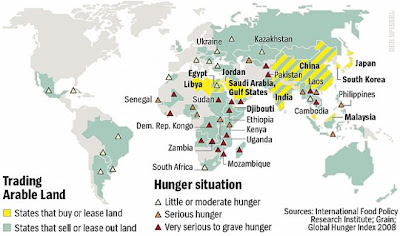 Vandana Shiva puts it, “We are seeing dispossession on a massive scale. It means less food is available and local people will have less. There will be more conflict and political instability and cultures will be uprooted. The small farmers of Africa are the basis of food security. The food availability of the planet will decline.”

The new scramble for African land has visited a multitude of problems on ordinary Africans and set the stage for ecological crisis and widespread hunger. African governments have falsely claimed that land available for sale is unused. Some defend the investors' acquisition of land in their countries, saying it is “virgin” or “under-utilized” or “uncultivated” or “degraded” land.In many cases, farmers and pastoralists have worked the land for centuries. However, governments are claiming this land is idle in order to more easily sell or lease it to private investors. Experts in the field, however, affirm that there is no such thing as idle land in Africa. According to Michael Taylor, a policy specialist at the International Land Coalition, “If land in Africa hasn't been planted, it's probably for a reason. Maybe it's used to graze livestock or deliberately left fallow to prevent nutrient depletion and erosion. Anybody who has seen these areas identified as unused understands that there is no land…that has no owners and users.” The land has a real purpose: it may support corridors for pastoralists; provide fallow space for soil regeneration; provide access to limited water sources; be reserved for future generations; or enable local farmers to increase production. The fact that rich and emerging economies do not have or do not respect pastoralists or use land for age-old customs does not mean we have a right to label this land unused.

Large-scale land acquisition poses massive ecological threats to the African environment. The dangers are numerous: hazardous pesticides and fertilizers cause water contamination from their runoff, the introduction of genetically modified seeds and other problems. Land previously left to lie fallow is now threatened with overuse from intensified agricultural development, a trend further exacerbated by speculative investment and the drive for short-term profits. Yet deals transferring vast tracts of land are typically taking place far removed from local farmers and villagers with virtually no accountability.

Investors have been quoted as saying they will employ 10,000 people and use high-tech, high-production farming techniques. The two promises are completely incongruous - high-tech, high production devices are appealing precisely because they reduce labor. Investors will not hire significant numbers of people and simultaneously scale-up their production techniques. And if they choose the former, they are likely to create low-paying jobs and poor working conditions.

Nations with large amounts of land sold or leased to foreign owners are often food importers, and their inability to feed their own populations is exacerbated by the displacement of food producers who grow for local use. The UN Conference on Trade and Development (UNCTAD) reports that Africa has lost 20 percent of its capacity to feed itself over the past four decades. Ethiopia alone has 13 million people in immediate need of food assistance, yet its government has put over 7 million acres of land up for sale.
From here 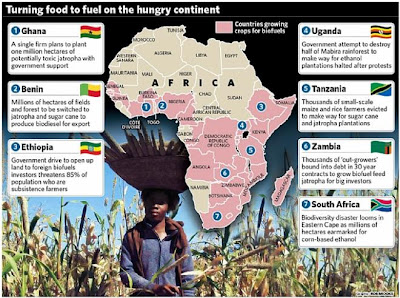 Posted by ajohnstone at 6:01 PM