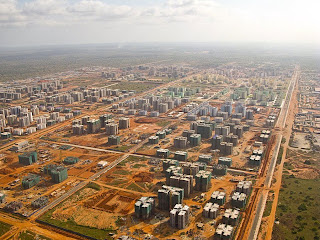 The state-owned China International Trust and Investment Corporation (CITIC) has built a town in Angola. And it's practically empty. Just outside Angola's capital city of Luanda is Nova Cidade de Kilamba a residential development of 750 eight-story apartment buildings, a dozen schools, and more than 100 retail units, a $3.5 billion development of 12,355 acres (5,000 hectares) that was built to house about 500,000 people. But the apartments in the complex cost somewhere between $120,000 and $200,000. None of which helps the average Angolan given the country's per capita GDP of $5,144 per year. Two-thirds of Angolans who live on less than $2 a day. In Angola there is just the very poor and the very rich so there is no-one to buy these sorts of houses

The jewel in Angola's post-war reconstruction crown, Kilamba is the star of glossy government promotional videos which show smiling families enjoying a new style of living away from the dust and confusion of central Luanda where millions live in sprawling slums. But the people in these films are only actors, and despite all the hype, nearly a year since the first batch of 2,800 apartments went on sale, only 220 have been sold.

The government has recently announced a portion of the apartments at Kilamba will be designated social housing, which people on low incomes can rent long-term at low prices. No-one is quite sure how that scheme will work or who will be eligible, and cynics have dismissed it as a vote-winning stunt ahead of parliamentary elections scheduled to take place on 31 August.

Source
Posted by ajohnstone at 6:26 AM