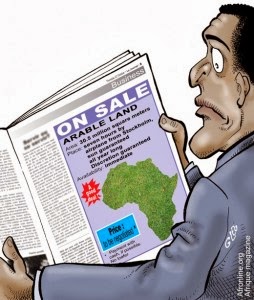 Land scarcity and volatility of food prices on the world market have led richer countries that are dependent on food imports to acquire large amounts of land elsewhere to produce food for their domestic needs. Access to land is critical for small-scale food producers. Lack of it defines ‘landless farm workers’. Losing it and becoming landless is feared by many smallholders, as it will mean losing food security and opportunities for development. It is the most marginalised groups in society who are most susceptible to land grabbing – which makes preventing it a crucial issue for poverty reduction and human rights.

The new wave of land deals is not the new investment agriculture that millions had been waiting for. The poorest people are being hardest hit as competition for land intensifies. Oxfam's research has revealed that residents regularly lose out to local elites and domestic or foreign investors because they lack power to claim their rights effectively and to defend and advance their interests.

While some investors might claim to have experience in agricultural production, many may only be purchasing land for speculative purposes, anticipating price increases in the coming years (known as ‘land banking’). World Bank analysis in 2011 of 56 million hectares of large-scale deals concluded that nothing had yet been done with 80 per cent of the land involved, suggesting a significant amount of land banking.

All of the above is happening while the global share of land available for agriculture has peaked. It is, in fact, reducing, as the world loses agricultural land to urbanisation and soil degradation. Land is not just an important productive asset. Even for families who have stopped living directly off the land, it often serves as an important safety net to fall back on when other economic ventures fail or when the economy fails to provide opportunities. Land has multiple other (so-called) secondary uses as well, which are vital to family livelihood security. It can provide fodder, nuts, fruits, roots, medicinal and kitchen herbs, dyes, rope, timber, and roofing and fencing materials. Many of these resources are available on common lands, and are often especially important for women. Land also provides a space for social, cultural, spiritual, and ceremonial events, and as such is essential for sustaining the identity and well-being of a community and its members.

Many researchers have shown that secure access to or ownership of land is associated with significant reductions in hunger and poverty. For women all over the world, lack of access to and control over land is a major determinant (and outcome) of gender inequality. . In rural areas, lack of access to land forces many women to sell their labour on cash-crop producing farms, where they are paid less than men. Women farm workers may also suffer sexual violence and harassment, discrimination, and devaluation of their work. Rural women often end up with a double burden of providing for and managing the household when men migrate in search of work – another consequence of land shortages. Women also fare disproportionately in conflicts over land, where they face a number of challenges. Discriminatory legislation is compounded by the sexism of those implementing the laws, and women often have little opportunity to participate in decision-making processes regarding new legislation, projects, or contracts. Compounding this, gender-based violence is often a common feature in conflicts over land.

Evidence from research on land grabs in Africa suggests that women are getting a raw deal. To begin with, women’s land rights are less secure and more easily targeted. They also depend more on secondary uses of land, which tend to be ignored in large-scale acquisitions. Furthermore, although women comprise the majority of farmers, men effectively control the land and the income derived from it, even if it is the fruit of women’s labour. In practice, a new commercial opportunity often means that men assume control of the land at the expense of women’s access. Thus, new sources of income from the land are likely to burden women and benefit men. The new competition for land between biofuels and food crops, leading to less availability of food and higher prices, is also likely to affect women more than men, as women tend to take responsibility for feeding the family.

From here
Posted by ajohnstone at 4:50 AM