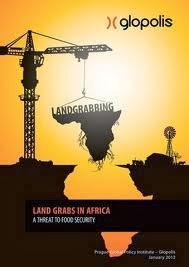 Sixty percent of all the world’s arable land is in Africa. In recent years, large agribusinesses have started to move in, often forcing out subsistence farmers.

Africa produces 10 percent less food than it did in 1960. With the rise of monoculture farming and globalized food production, the landscape of the continent is shifting and threatening its ability to feed itself.

In Mali, an American plan for a vast sugar cane operation on the banks of the Niger River threatens small-scale native rice farmers who have fed their communities for generations. Seventy-five percent of Mali’s population are farmers, and many Malian peasants do not welcome these efforts.

Devon Peña, in Mapping the Land Grab in Africa, says:
“It is easy to imagine the rest of the usual suspects behind this land grab: Transnational corporations are of course the principal force driving the new enclosures. Oil companies are certainly part of the land grab as are agribusiness, mining, timber, and certain manufacturing interests. These are all usual suspects. However, the new enclosures have some relatively new players: Private and even some public universities from the United States and other Western countries. A study reported in The Guardian reveals that “Harvard and other major American universities are working through British hedge funds and European financial speculators to buy or lease vast areas of African farmland in deals, some of which may force many thousands of people off their land…”

Posted by ajohnstone at 2:08 AM