Africa's Next Top Model - Another Reality? 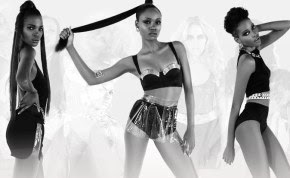 It all started with that extra faith as Aamito Stacie Queen boarded a bus heading to Nairobi-Kenya for the casting of first edition of Africa's Next Top Model (ANTM).
Next, she was on a plane to South Africa (Cape Town and Johannesburg) with 12 other contestants where the episodes of the reality TV modelling show were recorded. Right now, she is in the top three and a front-runner for the coveted title of Africa's Next Top Model. The other two models are from Angola and Nigeria.
The show premiered on November 10, 2013 on Africa Magic Entertainment. Supermodel Oluchi Onweagba, a Victoria's Secret model originally from Nigeria produces it. The grand finale takes place this Sunday live from New York.The show is similar to America's Next Top Model, a reality television show created by American supermodel Tyra Banks.
In the run-up to the finals, Aamito beat the two contestants in the photo shoot challenge. Lucky for them, none was eliminated; so, all the three are in the run for the crown. Former Calvin Klein model-turned-photographer, Josie Borain and Remi Adetiba, a New York-based creative director, photographer and The New York Times freelancer, plus Oluchi are the show's resident judges.
Queen, as the six-foot Aamito is commonly referred to by her friends in the Kampala fashion circles, has done exceedingly well through out. She has won four challenges and has held second or third place positions in the rest of the challenges during the show's past nine episodes. Joram Muzira, who has worked with her at his model management agency (JMM), is confident of her win.
"Her chances are very high because she has been doing very well in most of the challenges," he told The Observer.
Already hopes are high in the fashion fraternity in Uganda especially the models. She could be the person to start a rebirth and recognition of models in this country. Aamito has worked with different designers in the region including Ras Kasozi, Kwesh, Gloria Wavamunno, Adele Dejak, Sylvia Owori, and Mustafa Hassanali, among others.
The competition's winner gets a one-year modelling contract with New York-based modelling agency DNA, a product endorsement deal and a cash prize of $50,000.

UPDATE:
After an emotional, 9-week rollercoaster, the final 3 were whisked away to New York City, where they had to impress the high-powered agents at one of the world’s top agencies: DNA Model Management. In the end, Aamito from Uganda reigns supreme, and now stands as the first-ever Africa’s Next Top Model. Congratulations, Aamito!

from here and here

looking at the photos of those skinny women i was minded how they fail to reflect every African image of the perfect woman.

Fat is beautiful in a number of African countries.Diet pills have been replaced by growth hormones to fatten women up.