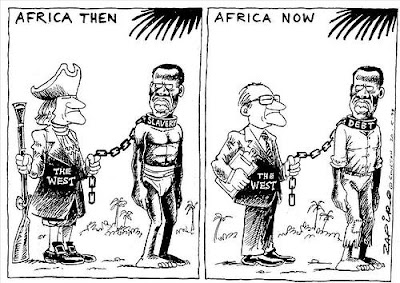 Why can’t the ex-colonial powers be made to pay reparations to Africa for what they subjected people to even after the institution of slavery and the slave trade was formally abolished and particularly during the colonial era? As a glaring example of the sheer cruelty of the Europeans during that period, King Leopold 11, who ruled Belgium from 1865 to 1909, actually owned the Congo and all that was in it as part of his personal estate. By virtue of his supposedly blue blood, one man owned millions of Africans and all their land and chattels even though he resided thousands of miles away in a distant Europe.

Such was this man’s innate brutality and monstrous power that he orchestrated and directed the slaughter of no less than 15 million Congolese Africans whilst he ruled from Brussels. This was so even though he never set his foot in Africa throughout his long reign. Yet the world sat by silently and did nothing. As a matter of fact, many of his fellow Europeans actually applauded his actions and described him as a good example and indeed the epitome of all that was noble and all that ought to be expected from the very best of European royalty.

What about Cecil Rhodes, the Englishman man who, according to European historians, ‘’literally and lawfully bought’’ a large part of southern Africa and all that was in it and who named that new frontier after himself by calling it ‘’Rhodesia’’? He also sent millions of Africans to their early graves. This is the same Cecil Rhodes who established the prestigious Rhodes Scholarship for Oxford University and whose money has helped, and still helps, to educate some of the western world’s most distinguished and celebrated leaders by paying for their fees at Oxford. One of those leaders was a young man by the name of Bill Clinton. Little did Clinton and all those other ‘’great’’ future leaders of the western world know that the money that was used to pay for their ‘’Rhodes scholarship’’ at Oxford was in fact blood money which had its origins and roots in the suffering of the tormented souls, wasted lives and barbaric slaughter of millions of dispossessed and enslaved southern Africans that were bought, sold, maimed, enslaved and butchered in the diamond mines of Cecil Rhodes’ De Beers company.

Every black child in grade school is taught that Adolf Hitler killed 6 million Jews and is the worse human being that ever lived. On the other hand our children are taught that the ‘’Right Honorable’’ Cecil Rhodes, the founder of the De Beers diamond company in South Africa, who killed ten times that number of Africans is a hero and a statesman and if they study hard and do well in school they may win the Rhodes Scholarship, the oldest and most celebrated international fellowship award in the world. They don’t mention that those scholarships are paid for by the blood of their ancestors. Such was the power of Rhodes’ sinister, evil, pervasive and malevolent legacy that it took over 100 years and a bitter and prolonged 15 year civil war (from 1964 to 1979) for the black Africans of that country to secure their rights, to be recognised and acknowledged as being human beings, to win the right to vote and to install democracy and majority rule.

It was only after all this was achieved in 1979 that the name ‘’Rhodesia’’ was dropped like a hot potato and was changed to ‘’Zimbabwe’’.

We need not go into the sufferings under apartheid South Africa at the hands of the white Boers from the day that the Dutchman, Van Riebek, arrived on the southern African coast in 1604 and saw what he graphically described as ‘’stinking black dogs’’. We need not talk about the humiliation and enslavement of our fellow black Africans at the hands of the Arabs of the Sudan, whether it be in Darfur or Southern Sudan for over 500 years. We need not go into the sheer barbarity and inhuman suffering that our brothers and sisters were subjected to in the sugar cane fields and the coffee and banana plantations of the West Indies and South America for many centuries. Everywhere we look throughout world history the story is the same: Africa and Africans have been pillaged, raped, tortured, humiliated, enslaved, butchered, wrenched from their families, scattered, bought and sold, considered as chattel and treated with the most explicit and extreme forms of brutality and violence by those who have a different skin color to us and those from outside our shores.

There have been no reparations and no formal apology. Instead what they have given us today is the ‘’second slavery’’ of foreign debt and humiliating servitude by every single African country to the western monetary agencies such as the IMF, the Paris Club, the Bretton Woods Institutions and the World Bank. They have turned successive African governments into little more than desperate pimps, shameless prostitutes and indebted and pliant little beggars. They have squeezed the very life out of our people, destroyed the future of our respective nations and blighted our collective destinies. This is neo-colonialism in its most primitive and raw form.

Africa should demand reparation not bailout.

The plight of African continent can be traced down time line; the slave era. Although slavery was one of the admixtures of productive labour relations practised in many nations in Africa long before the adventure of Arabs slave merchants and subsequently their European counterparts. The lust for black skin by these two slave merchants race signalled the precursor of what became the Trans-Atlantic slave trade that lasted over four centuries. More than four centuries of dehumanizing any human race was enough to truncate and stagnant its natural evolution in all ramification. As slave trade came under scathing castigation by the capitalist in the early stage of industrial revolution, they used the church to propagate its moral burden on nations trading in slaves. The frontier of dehumanization was systematically extended to encompass acquisition of colonial territories outside the mother countries. The unfair balance of economic, military and technology might was always in favour of the conquerors against the conquered people. As the conquering nations grow richer and more powerful due to their new mode of production, they seek foreign markets and also natural resources to feed their industries. The capitalist had to look no further than where their fore-bears looked (Africa) to get their needed resources. Their grandfathers came to buy or catch black skins; they too came to expropriate the riches in Africa’s soil. Pockets of resistance by angry, humiliated and dehumanized Africans were met by brute force made possible by the use of superior fire-arms.

According to Frantz Fanon colonialism hardly ever exploits the whole of the country. It contents itself with bringing to light the natural resources, which it extracts and exports to meet the need of the mother country’s industries. There by allowing certain sectors of the colony to become relatively rich while the rest of the colony follows its path of underdevelopment and poverty or sink into it more deeply. Immediately after independence, the people who live in the more prosperous regions realise their good luck and show a primary and profound reaction in refusing to feed the other people. As soon as the capitalists know that their government is getting ready to decolonize, they hasten to withdraw all their capital from the colony in question. The spectacular flight of capital is one of the most constant phenomena of decolonization. African unity, that vague formula, yet one to which the man and woman of Africa were passionately attached and whose operative value serve to bring immense pressure to bear on colonialism takes off the mask and crumbles into regionalism inside the hollow shell of nationality itself. The national bourgeoisie, since it is strung up to defend its immediate interests and sees no farther than the end of its nose, reveals itself incapable of simply bringing national unity into being or of building up the nation on a stable and productive basis.

The wealth of the colonizers is our wealth too. Europe has stuffed herself inordinately with the gold and raw materials of the colonial countries. The ports of Holland and docks of Bordeaux and Liverpool were specialised in Negro slave trade and owe their renown to millions of deported slaves. So when we hear the head of a European state declare with his hands on his chest that he must come to the help of the poor underdeveloped peoples, we do not tremble with gratitude. Quite the contrary; we say to ourselves; it is our just reparation which will be paid to us. The realization by colonized peoples that it is their due, and the realization by the capitalist powers that in fact they must pay for it.  The capitalist powers in their Machiavellian control of world economy are adept in the use of blackmail, deception, intimidation, agent provocateur, conflict and crisis instigation and wars to maintain stranglehold on underdeveloped nations of the world. Today, carbon trading has crept into the socio-economic relations in international politics. As usual, African continent has been targeted to bear the burden of climate changed caused by industrial nations of Europe. Their corporations despoiled and degraded our rich eco system through oil and mineral explorations. They are buying our forest now in their bid to grab our lands in the name of a phoney carbon trading deals. Just like in the days of slavery, our greedy self-centred and unpatriotic leaders always connive with them as accomplice in all the dehumanizing trade relations.

Nationalists in Africa see the matter differently, painting idyllic pictures of the African past. Colonialism whether it was of the British, Belgian, French or German variety was not meant to be a benign enterprise. The motive behind its establishment was one: the exploitation of labour and the accumulation of economic surplus. Consequently, the driving force behind it, capitalism, did not spare the exploitation of labour in both the metropolis and other lands even if it meant spilling blood to fulfil this sordid agenda. The festering of tribalist, nationalist and racist sentiment are nurtured and sustained by the capitalist system of production which produces only for profits and not for needs. The abolition of the profit system and its replacement with socialism based on the common ownership and democratic control of the means and instruments for production and distribution would put an end to discrimination and bigotry. But this cannot happen unless people understand and see the need for this kind of change. More than ever before, the formation of socialist parties in Africa to take up the task of spreading the socialist message has become urgent. 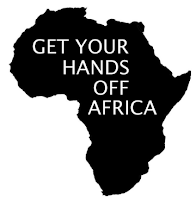 Posted by ajohnstone at 4:44 AM