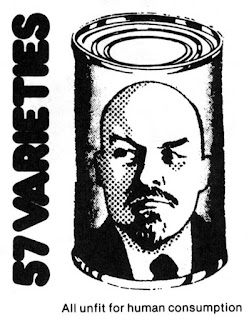 The words socialism and communism were used interchangeably by Karl Marx and Friedrich Engels. It was Lenin more than anyone else who introduced a distinction between the two.

Lenin stupendously amplified a theoretical presupposition in Marx’s Critique of the Gotha Programme to advance his political dogma of socialism at two stages – the first phase of socialism was what existed in . The second or higher stage was what up till then socialists had assumed socialism to be, the distinguishing feature of socialism consisting in the fact that in it money, classes and states won’t exist.

The following quotation from Marx may help us to understand how he defined socialism and historical materialism:

The mode production in material life determines the general character of the social, political and spiritual process of life. it is not the consciousness of many that ??? existence, but on the contrary their social existence determines their consciousness. At a certain stage of their development the material forces of production – with the property relations with which they have been at work before. From forms of development of forces of production, these relations turn into their fetters. Then comes the period of social revolution, with the change of the economic foundation, the immense superstructure is more or less rapidly transformed. In considering such transformation, the distinction should always be made between material transformation of the economic condition of production which can be determined with precision of natural science and the legal, political, religious, aesthetic, philosophical – in short the ideological forms in which men become conscious of this conflict and fight it out.’

The Communist Manifesto was published by the Communist League – it was exclusively German and later on became international under the political conditions of 1848. Drawn up in in 1848, the manifesto had been published in a few weeks before the outbreak of the French revolution of 1848.

The Communist Manifesto came to vindicate the facts set forth in the materialist conception of history:

(a)    That all history has been the history of class struggles.
(b)   The particular structure of social classes at any given time is determined by the mode of production.
(c)    The bourgeois order (capitalism) like all previous systems gives rise to contradictions which cannot be resolved within its framework.
(d)   The working class will take the initiative and acquire political power from the bourgeoisie and establish a socialist society.

Lenin and Trotsky were confident that the success of the Bolshevik revolution in was going to spread to other parts of the world. When Lenin died in 1924 he was succeeded by Joseph Stalin as leader of the Communist Party.  Stalin started to revise the party’s theory to fit the existing conditions prevailing in . To achieve this Stalin had to purge a member of the old guard. Trotsky had to flee from .

When we reflect upon the political and theoretical disagreements that engulfed working class movements and the contradictions that followed the dawn of the Bolshevik revolution, we find the differences dated from earlier than 1914. They arose due to a grave misconception of Marx’s earlier writings – that a socialist revolution could take place in an economically backward country while Marx was certain that it was likely to begin in industrialised countries (, and ).

This fact confronted Lenin when the Bolsheviks came to power supposedly under the slogan of the proletarian revolution. To evade this contradiction Lenin had to construct a new political dogma: that the socialist revolution in was to be realised neither by a party wedded to parliamentary democracy nor by conspiratorial force – but by a party of dedicated revolutionaries which would establish the “Dictatorship of the Proletariat”,  a purely political creation. The task of revising and distorting historical materialism preoccupied Lenin and Trotsky evading the salient laws of history through other tactics and empty slogans. ‘Better fewer but better’ this was Lenin’s conception of party or revolutionary organisation and was later embraced by other ‘communist’ regimes.

Every person with even a crude reading of Marxist literature will wince at the misunderstanding and misrepresentation of historical materialism so prevalent today due to the distortions of ‘Marxism-Leninism’. Granted that the kind of political dictatorship implemented by the Bolsheviks was not socialism, what was the contradiction of Russian ‘socialism’ in relation to historical materialism? A mere glance at the Communist Manifesto shows the premises set forth there were completely at variance with the political conditions that prevailed in the USSR, not to mention the political and theoretical blasphemies exposed in single-party political regimes in Russia, Cuba, China and North Korea – maxims that were adopted also in Africa when the struggles for political independence were on the upswing and in Latin America and the Third World generally.