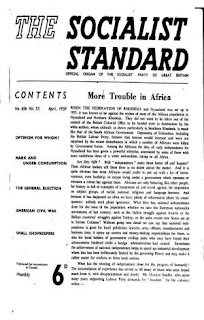 From the April 1959 issue of the Socialist Standard
When the Federation of Rhodesia and Nyasaland was set up in 1953, it was known to be against the wishes of most of the African population in Nyasaland and Northern Rhodesia. They did not want to be taken out of the control of the British Colonial Office to be handed over to domination by the white settlers, whose attitude, as shown particularly in Southern Rhodesia, is much like that of the South African Government. Opponents of Federation, including the British Labour Party, foresaw that tension would increase and were not surprised by the recent disturbances in which a number of Africans were killed by Government forces. Among the Africans the idea of early independence for Nyasaland has been given a powerful stimulus, associated by some of them with more ambitious ideas of a wider nationalism, taking in all Africa.
Are they right? Will “independence” make them better off and happier? Their African leaders tell them there is no doubt about the matter. And it is quite obvious that most Africans would prefer to put up with a lot of inconveniences, even hardship, to escape living under a government which operates or tolerates a colour bar against them. Africans are only behaving like other people, for history is full of examples of resentment of, and revolt against, the imposition on subject groups, of racial, national, religious and language barriers. And because it has happened so often we have plenty of information about its consequences: nobody need plead ignorance. What then has national independence done for the mass of the population, whether we take the European nationalist movements of last century, such as the Italian struggle against Austria or the Balkan countries’ struggles .against Turkey, or the quite recent new States set up in former Colonies? Without going into detail we can say that national independence is good for local politicians, lawyers, army officers, manufacturers and business men; it opens up careers and money-making opportunities for them, as also for local holders of government civilian posts who may have found their advancement hindered while a foreign administration had control! Sometimes the achievement of national independence helps to speed up industrial development where this has been deliberately limited by the governing Power and may make it rather easier for workers to form trade unions.
What has the winning of independence done for the progress of humanity? The accumulation of experience has served to fill many of those who once hoped much from it, with disappointment and doubt. Mr. Hannen Swaffer, who spent many years supporting Labour Party demands for “freedom" for the colonies, writes:—

“. . . at St. Martin's-in-the-Fields, under my window, British people were gathering to offer thanks on the anniversary of Ghana’s obtaining freedom from British rule. Yet, in Ghana, its native rulers were oppressing the Opposition leaders—and its dictatorial Premier had boasted that he would work for a United Black Africa. Is full freedom for immature peoples really the remedy for economic injustice?”- (People, 8th March. 1959.)

Mr. Swaffer might have added that on the political side we have recently seen military dictatorship set up in the Sudan and Pakistan, two areas formerly British-administered, and that from the standpoint of what he calls “ economic injustice,” independence has not brought anything worthwhile to the ex-colonial workers. The early beliefs of Swaffer and the Labour Party, that national independence for the colonies would solve the economic problems of the workers, were well meant, but quite unfounded. They did not understand what is the nature of nationalism and national independence. Nationalism is not just the friendly association of people who speak the same language, share the same culture and live in the same place. In the world in which we live, where military force dominates, national independence means setting up a “sovereign state”; a government which, with the use of armed force can impose its property laws on its nationals individually and on its workers as a class, while at the same time using its forces to strengthen its position against other nations. The creation of a new capitalist group able to hold its own in a competitive capitalist world is the real aim of those who profit by nationalist movements; the encouragement of national and linguistic sentiments is merely the means to an end.
This is little appreciated by those who think that what mankind needs is a set of “good” ideas and ideals, and that national independence is one of these. Holding such a conception they are shocked and puzzled when they see liberated countries falling to dictatorship, and see some Africans now preaching anti-white racialism.
So although the liberal-minded Capricorn African Society, looking at what has already happened, can say that “Nationalism is not enough,” their founder, Mr. David Stirling still believes that “ African nationalism is of itself a splendid and dynamic force to be encouraged ” (Manchester Guardian, March 5th, 1959). And Father Trevor Huddleston, who worked so hard for Africans against the policies of the South African government, still holds to his belief that nationalism “on the part of the great peoples of Africa” is “not only natural but entirely’ right.” (He does not notice that the nationalism of all groups, including the white South Africans, appears to to them to be equally “natural” and “ right”) He backs his belief with the distorting half-truth that “over much of Africa wealth was white and poverty was black.” (Manchester Guardian. March 9th, 1959.) This is the kind of misleading political slogan on which all nationalisms thrive; misleading because when independence has been achieved the African masses will still be poor, though the number of rich Africans, rich through the exploitation of the poor, will be somewhat larger. The subject economic position of the African workers will not have been removed.
It is here that we see the gulf between Socialists and the well-meaning reformers like Father Huddleston and the Capricorn Society. For us, it is a question of changing the basis of the social system as the only way to change the condition of the exploited masses, the only way to abolish riches and poverty. For the idealists, it is a matter of “changing men’s hearts,” as if that could prevail against the class structure of the capitalist social system. True to his misguided notions Father Huddleston calls upon white settlers and the British government and people to choose “the path of faith ” and reject “the path of fear.”
But these idealists are not the only people who have views on Africa. A Tory peer. Lord Brand, has recently revisited South Africa, and in an article in The Times (March 9th. 1959), foretells the inevitable failure of Apartheid. But he is not relying on good intentions, or sentiment or faith, but on something more substantial. He finds that it is an economic impossibility for the mining, industrial and commercial companies, farmers, employers of domestic service, etc., to survive if cut off from their African labour force. Though the supporters of the South African government will not face up to realities, the fact is that “white and black must live together for endless centuries. They must either in the end learn to live harmoniously and at peace, or they must physically destroy each other.” Lord Brand sees that far, but no farther.
As Socialists, we can say that his approach shows more understanding of the problem than does that of any of the good intentioned idealists already referred to. Lord Brand, though he never names it, is a supporter of capitalism: he believes it to be the only possible social system. He sees that capitalism has its own needs and economic laws and that, however obstinate the Apartheid supporters may be, they cannot put the clock back and make capitalism fit their out-of-date beliefs. But if the Afrikaners in South Africa cannot twist capitalism back to suit their prejudices, neither can Huddleston and the other would-be reformers make capitalism into the rational and benevolent social system of their dreams. “Liberated” Black Africa will be Black Capitalist Africa and the African workers will still be exploited, as are the white workers elsewhere. The only way out of this impasse is that the Black workers and all other workers join together for the Socialist objective of overthrowing capitalism and establishing Socialism, in Africa and all other lands. But this will involve the abolition of national frontiers and the disappearance of racial prejudices. The world will then be a place for all its inhabitants to live in and travel in, freely and without hindrance or prejudice. The Blacks will be emancipated because all workers will be emancipated from capitalism.