Nearly half of all deaths and about a third of disabilities in low and middle-income countries could be avoided if people had access to emergency care. In Africa, the main causes of emergencies are road accidents, obstetric complications, severe illnesses and non-communicable diseases.

Less than a third (29%) of the total population and 28% of the women of childbearing age, lived more than two hours from the nearest hospitals. The two-hour threshold is a widely used recommendation by the WHO and the Lancet Commission for global surgery for defining access to emergency obstetric and surgical care respectively. In addition, international benchmarks by the Lancet commission for global surgery recommends having 80% of any given population within two hours as critical in ensuring universal health coverage by 2030.


The best served countries were mostly islands like Zanzibar, Comoros and São Tomé and Príncipe. More than 95% of their populations were within two hours of a hospital. Large countries such as Kenya, South Africa and Nigeria also had good access indices, with more than 90% within the two-hour band.
Only 16 countries in our survey achieved 80% coverage in access to a hospital within two hours.
Nigeria, which accounts for close to a fifth of sub-Saharan Africa’s population had the highest number of hospitals at 879. Other countries with significantly high numbers of public hospitals were the Democratic Republic of Congo (435), Kenya (399) and South Africa (337). 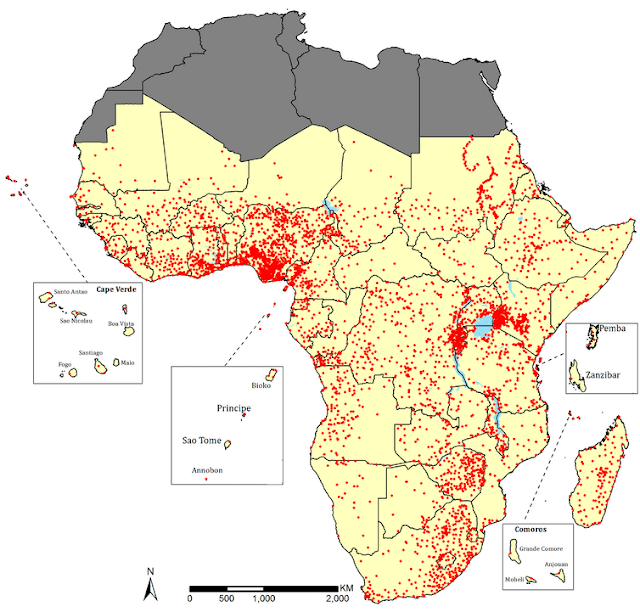 Posted by ajohnstone at 5:10 AM