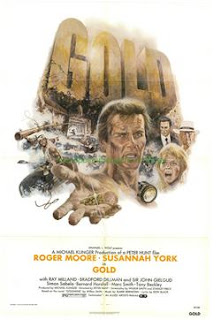 Film Review from the December 1974 issue of the Socialist Standard

A correspondent in South Africa has sent us this account of the screening of a film based on life there.
"Gold" has well-known actors in the leading parts, and several hundred Africans — of whom two are named in the printed programme. This film, recently screened in Johannesburg, was made in and around this city and London. It was produced with the co-operation of a major South African gold-mining corporation, so it would be safe to assume that it does not misrepresent the gold mining industry — adversely, at least.
The plot revolves round (apart from the cuckolding of the villain by the hero) the machinations of an international syndicate of investors led by the grandson-in-law of and heir to the good-natured, scrupulously honest, uninvolved big boss of the Mining House. Their aim is to flood the mine secretly (with the loss perhaps of a hundred or so miners' lives — "but then there's a price on everything") in order to cause a sudden rise in the price of gold and a drop in the share prices for this particular mine. With their foreknowledge of the event they hope to make a "killing" on the Stock Exchanges of the world.
Near the beginning of the film a "normal" mine disaster occurs with the usual fatalities and injuries among the miners, of course, though this time the underground mine manager is also killed. At a ceremony in an open-air stadium, to signify the company's appreciation of the sacrifices of the miners, a black hero is presented with a "gold" helmet and the widow of another African miner is awarded a pension for life of R120 — about £80 — per annum. (The pension of the mine manager's widow is not mentioned.)
I noticed that the sleek preview audience made no audible response; maybe they were asleep. Later, I looked at my seat-ticket (a complimentary one, I hasten to add!) and saw that the price stamped on it was R20, about £13.50; and it was not for one of the best seats by any means. This "Gala Première" was in aid of charity — oddly, not for silicosis or other mining diseases but for teaching aids for dyslexic pupils. Either way, the need for charity from the wealthy springs from the very social system which maintains them in economic supremacy.
Scenes of magnificent homes with high living and conspicuous consumption for the mine-owning minority and their scenic playgrounds in the bush-covered mountains alternate with shots of working conditions underground — though we are not shown the barrack-life living conditions for black miners in the mine compounds.
I can recommend the film for its scenes of how some of the rich live in South Africa and for shots of (typical ?) underground working conditions here. Also, for those interested, some fine aerial views of the Highveld bush and mountain scenery in the Transvaal. Mainly, however, one sees how false issues — a "moral conflict" — are made from different evaluations of human beings in the search for gold and profits.

Posted by ajohnstone at 5:37 AM