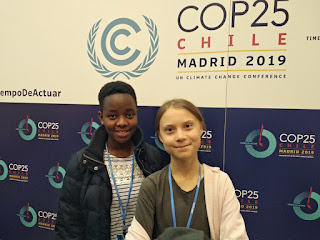 To mark the global climate strike on 29 November, Leah Namugerwa, the 15-year-old Ugandan activist, who co-runs Africa’s most prominent chapter of Fridays for Future, marches along the shores of Lake Victoria, leading a chant until her voice grows raw.

Namugerwa, who has been walking out of classes every Friday since February, has spearheaded a tree-planting campaign and a petition to enforce the country’s plastic bag ban. In her short time as a climate activist, she has met foreign ambassadors and Uganda’s speaker of parliament and attended conferences in Rwanda, Kenya, and Switzerland.

East Africans stand to be among the worst affected by climate change, which can impact everything from crop production to malnutrition and the spread of disease. Uganda is increasingly experiencing prolonged droughts in the north, landslides in the east, and flooding caused in part by the loss of tree cover. In one recent week, 36 Ugandans reportedly died as a result of unusually heavy rainfall.


She was inspired to take action after watching news reports of mudslides and flooding in rural parts of the country.


“This was not people being hit by gunshots – this was nature,” she says. “My fellow students losing schools, losing their parents, losing crops… It was really disturbing.”


She is not even demanding new environmental policies. Rather she is merely calling for existing legislation to be enforced.  She joined forces with co-founder Sadrach Nirere, Fridays for Future Uganda's co-founder Hilda Flavia Nakabuye and her cousin, Bob Motavu to form Fridays for Future Uganda, and they began planning larger events in addition to the weekly walkouts.
The group has not received much institutional support.
“The first teacher I talked to about it told me that what I’m doing is useless,” says Nakabuye. “He thinks climate change is God’s plan and I cannot do anything about it since I’m human.”
Uganda has one of the world’s youngest populations, with a median age of just 15. It’s a potentially important resource, though tapping it may be easier said than done. She admits she has a larger following abroad than at home, and winning over her young peers will be her next big challenge.

Posted by ajohnstone at 3:33 AM