A Chinese economic slowdown could especially hit countries that are part of China's Belt and Road Initiative (BRI) — 40 of Africa's 54 countries had signed agreements with China to be part of it by September 2019.

Chinese companies are building the vast majority of roads, ports, airports and other transportation infrastructure across Africa. In 2018, they accounted for 62% of the market share on the continent, according to Berlin-based European International Contractors (EIC).


China's engagement of the continent over the past two decades has partly been behind the reactivation of the growing interest from Africa's traditional partners, and changed the "terms of engagement," according to Hannah Marais, one of the authors of Deloitte Africa's 2019 "Africa Construction Trends Report." This has assisted to reposition Africa as a commercial opportunity rather than a recipient of donor funds.


"The China-Africa relationship has shifted the conversation around Africa," Marais told DW during a phone call.
Chinese companies aren't just profiting from Beijing's support. They also benefit from European funds. African countries also borrow money from European and multilateral development banks, such the European Investment Bank and the World Bank. The governments tend to choose Chinese contractors because they are cheaper. And that's a global trend.
Chinese companies are now receiving more World Bank funds, according to the Rhodium Group. "Chinese firms captured as much as 21% of all World Bank transportation infrastructure project value in 2018, up from 12% in 2014," it says.
Meanwhile, European companies often find themselves competing with each other. Chinese firms tend to work together. Every country in the EU focuses on its own construction industry, experts say.
Hans Joachim Bliss of the Federation of German Contractors (HDB) said, "One company can't compete with a state-owned company from China."
https://www.dw.com/en/building-africa-can-europes-construction-firms-compete-with-chinas/a-52435595 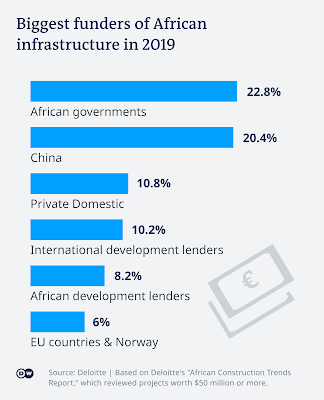 Posted by ajohnstone at 3:13 AM