We are all Africans 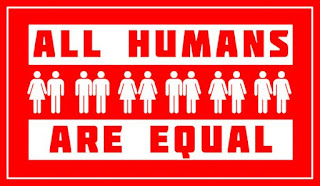 Since some Homo Sapiens 125,000 years ago began to move from the African continent, humans can be found all over the world. By moving, humans have tried to escape inadequate food-supply or otherwise unacceptable living conditions. Natural forces have forced them to leave, or even more commonly – violent actions by other humans. Humans are naturally social beings. We live in communities, both within our family and a larger society, and such a life is certainly more pleasant, more stimulating and safer if we are caring and friendly, rather than greedy, easily irritated and hostile.

Africa has a population problem. Africa retains fertility rates far above replacement. The future of Africa looks grim; the continent will remain largely poor and rural. Women will be forced to have child after child, swelling the numbers of humanity in the one place on Earth that can least easily support them. But this is also a too pessimistic a prognosis.

In Nigeria a typical apartment block is known as a ‘Face Me, Face You’ because whole families squeeze into 7-by-11-foot rooms along a narrow corridor. Up to 50 people share a kitchen, toilet and sink —although many of  the pipes no longer carry water. Slum-dwelling in Africa has become the normal trend with millions of people living in settlements characterised by some combination of overcrowding, ramshackled unsafe dwellings, and limited or no access to water and sanitation. Urbanisation without industrialisation means that jobs and livelihoods too often remain low-skilled and poorly paid. Without the opportunity to develop skills and organise collectively, workers exert little influence over working conditions. When formal jobs in industry or services are scarce, the informal economy absorbs much of the labour force. Africa is the embodiment of capitalist exploitation. For almost four centuries it has been systematically plundered for its raw materials and human labour. Africa is rich beyond the dreams of avarice but its people have never enjoyed its riches. Both foreign and native exploiters have relegated its people to abject poverty and endemic misery for generation upon generation.

Approximately three-dozen countries, largely in sub-Saharan Africa, are projected to more than quadruple during this century according to the United Nations. Paradoxically in many African regions, the problem is underpopulation: The people are so thinly spread over large areas that it is often difficult to create a meaningful infrastructure to promote the interaction crucial to development. Africa's average population density is only 16 per square kilometer, against China's 100 per square kilometer and India's 225. In fact, Africa has only one-fifth the population density of Europe. Furthermore, Africa has more arable land per capita than any other developing region.

Migration by humans has been a fact of life throughout their evolution. Homo sapiens emerged from Africa. Migration has been an essential mechanism for survival in the harsh climate and erratic agricultural conditions of the Sahara and Sahel regions for as long as people have lived there. To feed oneself, to provide for ones family , men and women will always seek other lands, and while the grass is still literally greener on the other side then men and women will endeavour to reach it. Only when it is possible to maintain an adequate living standard at home, will men and women stay at home. That is something Capitalism will never be able to offer many people throughout Africa.

Now a series of climate crises is forcing people to migrate, leave their homes and occupation. Climate change threatens to cause one of the biggest refugee crises of all time

Poverty, failing ecosystems, vulnerability to natural hazards and gradual environmental changes have always been linked to migration. The effects of warming and drying in some regions will reduce agricultural potential and undermine the provision of clean water and availability of fertile soil. The increase in extreme weather events such as heavy rains and resulting flash or river floods in tropical regions will affect even more people and generate mass displacement. A sea-level rise will permanently destroy extensive and highly productive low-lying coastal areas that are home to millions of people who will have to relocate permanently. Its main impacts are escalating humanitarian crises, rapid urbanisation and associated slum growth, and stalled development.


African migration is predominately within the continent, particularly between neighbouring countries. In 2013, 65 percent of the 20 million sub-Saharan African migrants, who had left their countries, were still living in the region.

The driver of African migration include the desire for a better and safer life, and the search for work. People are also forced to move by war, harsh economic climates, bad governance and environmental degradation. Remittances – money sent by migrants to their home countries – are one of the biggest benefits of migration for African countries. However, Africa’s loss of skilled and educated people remains a major negative consequence of migration.

Africa's population boom can be an asset if it is managed carefully planned.

World socialism is a vision of the 'one world' principle - we have one world and that is to be shared between us all. A world of common ownership with free movement for all. The underlying problem to be eliminated is not migration but capitalism. In a socialist society humanity will for the first time be truly free and living according to natural principles, it will consciously direct its own development. Mankind will act consciously and according to a plan and to the whims of the market economy. With socialism overpopulation will not be an issue. The solution to the population “problem” is to overthrow capitalism for if production is geared to the needs of the people and not to filling the coffers of a few capitalists and their corporations there will be no population problem. It is not people who are “polluting” the world with their numbers but Big Business in search for profits

Posted by ajohnstone at 7:23 PM