The Year of the Locusts

In 2020, a locusts plagued the Horn and East Africa, ravaging crops and pastures and driving the level of human hunger and economic hardship higher in parts of the region.

Now in 2021, the United Nations has warned that a second and maybe even deadlier re-invasion of locusts has already begun.

"It's a continuation of the 2020 locusts swarm. The adults have flown to various areas and are laying eggs", Frances Duncan, Professor of Animal, Plant & Environmental Sciences at the University of the Witwatersrand, told DW. "If we have good rains like it is the case at the moment in most areas, the hoppers will hatch, and we get the second wave of the swarm."

Five countries have been especially hard hit by the African migratory locusts: Ethiopia, Kenya, Somalia, Sudan, and Yemen. As a result, more than 35 million people suffer from food insecurity. FAO estimates this number could increase to 38.5 million if nothing is done to control the new infestation.

The FAO warns that numerous immature swarms have already formed in eastern Ethiopia and central Somalia during December, now they have reached northern Kenya. More swarms will arrive in January and spread throughout Ethiopia and Kenya. In northern Somalia, swarms laid eggs in areas affected by Cyclone Gati. Heavy rains in the region had turned out to favor the locusts, the UN says. New immature swarms could start to form in early February. Adult groups and a few swarms appeared on the coast of Sudan and Eritrea in December.

"If the locust swarm is not controlled, it can completely destroy the crop and wipe out animal feed. This poses a serious threat to food security in the region and can lead to human and social crises," Amh Yeshewas Abay, Head of Natural Resources Office in South Omo Zone Hamer Woreda in Ethiopia, said in a DW interview. "We are working to eradicate locusts in northern Kenya and on the border with Somalia."

Keith Cressman, FAO's Senior Locust Forecasting Officer, explains,  that the livelihoods of the population need to be protected.

"If a farmer has crops planted and his crop has been wiped out, and he does not have resources to buy new seeds to replant, the FAO can assist. For pastoralists, if there is not enough food for animals, the FAO can provide animal feed."

According to Daniel Lesego from Kenya's National Disaster Management Unit, the locust invasions come with multiple risks apart from food insecurity. "If there will be competition over pasture, space, and water, then it is likely to trigger conflict, resource-based conflict, and that is something that we do not want to see in Kenya," 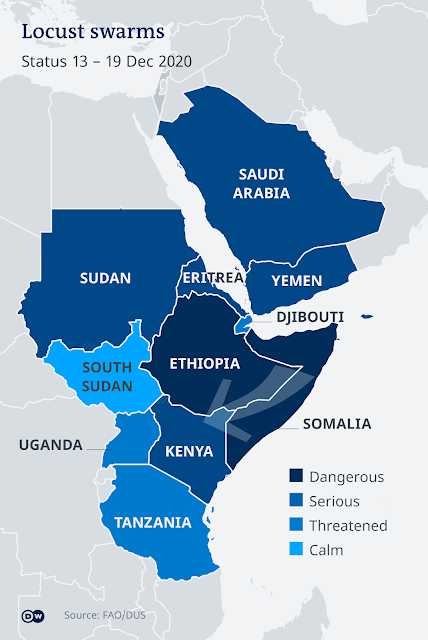 Posted by ajohnstone at 8:51 AM