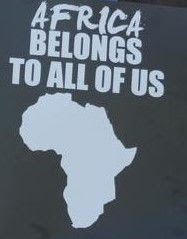 The Western media concentrate its focus on African youth migrating to Europe. Less coverage is given to the intra-African migration patterns.

A 2020 IOM report confirms that 80% of Africans responding to a 2017 survey said they had no interest in leaving the continent.

African Union figures show that the level of intra-African migration rose from 13.3 million to 25.4 million between 2008 and 2017. But, according to the International Organization for Migration (IOM), that's only half the story.

"We really have a very incomplete picture of the most recent trends and mainly also the number of people moving across countries," Rango Marzia of the IOM's Global Migration Data Analysis Centre (GMDAC) told DW. "There's a whole story of migration within Africa and across Africa, particularly across countries in the same regions such as West Africa, where interregional mobility is high, which we don't really see in mainstream media,"

The causes for such massive movement of people across African countries range from economic reasons to the need for security. And there is a huge prospect that intra-African migration will continue to increase, according to Marzia. Long before the creation of colonial borders, Africans moved within the continent and beyond.

Christian Kobla Kekeli Zilevu, an immigration official in northern Ghana, about the picture within the regional bloc, the Economic Community of West African States (ECOWAS), explained, "People move from one country to the other for survival. Some also travel because they feel their homes are not okay, and they want to try another place."

The IOM's Rango Marzia acknowledges that the negative perceptions associated with migration are largely linked to political instability, conflicts and climate change. However, she argues that it is not these problems that make migration bad but rather the manner in which it is managed.

"So it's more of the policies that are in place or are not in place to manage migration, and this is also true for migration from Africa to Europe," said Marzia.

The public debate that fuels anti-migrant sentiments is not often backed by evidence. But efforts are being made to reverse that.

Posted by ajohnstone at 7:42 PM