Insecurity in the West African countries of Mali and Burkina Faso paved the way for the military to remove failing governments.

"There's no more room for mistakes," said Mali's coup leader as he seized power in August 2020.

"We have more than what it takes to win this war," echoed Burkina Faso's new leader in charge earlier this year.

Many people in Sahelian countries who are desperate for solutions do believe that military governments can handle insecurity better than democratically elected ones, but analysts warn that this popular support could soon sour.

So are citizens now safer? No.

In both countries, attacks by Islamists on civilians have only increased. The same is true of civilian deaths - more ordinary people are being killed by Islamists, militants and the military.

Former Burkinabè soldier-turned-analyst Mahamoudou Sawadogo tells the BBC since then under the new junta the armed forces have been promised better conditions, more resources plus an anti-terrorism strategy review - "but that hasn't fixed the problem".

"Attacks are on the up, there's more violence against civilians and more territorial control has been lost to armed groups - so the putschists' strategy isn't adequate against the threat," he adds.

"The tallies for each year are increasing year by year," says Héni Nsaibia, a senior researcher covering West Africa's Sahel region for the Armed Conflict Location and Event Data project (Acled). Nsaibia says tracking violence is particularly hard in the Sahel because of "Russian-driven disinformation, and the states themselves often feed the media with fake reports to make them appear more successful than they really are". He explained, "This is a classic problem, sometimes referred to as the issue of the 'missing dead'," says Mr Nsaibia of Acled. "State-sanctioned violence goes unreported, but sometimes even framed as being perpetrated by someone else."

Malian authorities are fully in control of as little as 15% of the country's territory, according to a recent UN report. Meanwhile in Burkina Faso only about 60% of the country is under state control, says the West African regional bloc Ecowas.

"It's warfare between an army and a clandestine army" and in large swathes of these countries "the staying power of the state is not there", argues political scientist Abdourahmane Idrissa, from the University of Leiden.

International Crisis Group (ICG) Sahel project director, Richard Moncrieff, said that in Burkina Faso as well as Mali, Islamists engage in "classic asymmetric warfare where they don't take control of any cities. They do increasingly encircle cities and cut them off in order to flex their muscles, and otherwise have become very rural."

Mali has been the epicentre of Islamist violence in the Sahel for the past decade, with jihadists enabling ethnic Tuareg rebels to seize control of much of the north in 2012.

French troops were called in to tackle the insurgency the following year, with Malians initially welcoming the intervention by its former coloniser. But after nine years they are leaving Mali after falling out with junta, and Mali has also decided to quit the multi-national G5 Sahel force that was jointly created to fight the jihadists.

As the French-led Barkhane force has shifted the central hub of its anti-jihadist operation to Niger, militants from Islamic State in the Greater Sahara have "exploited the void left behind" to wage "unprecedented levels of violence" in the regions of Menaka and Gao, according to Mr Nsaibia.

The Mali junta's activities since taking power - including hiring troops from Russian security contractor Wagner and buying a large number of arms from Russia - have failed for lack of coherent strategy.

In recent years as their influence has waned in the Middle East, the Islamic State group and al-Qaeda have increasingly focused their efforts on the Sahel. They have exploited existing tensions in communities, says Mr Moncrieff, with "climate change and declining agricultural resource adding to that very violent mix".

"It's a vicious circle," he adds, with "people being excluded from their fields by insecurity, when that makes them more likely to join groups that are either jihadist in nature or simply criminal gangs who aim to steal cattle and so forth."

The spread of jihadist violence from northern to central Mali over the past seven years, and its emergence in Burkina Faso in the last two years, has implications elsewhere in West Africa.

"We also see it in the coastal states, especially Benin, and more recently Togo," says Mr Nsaibia. "So far it's only really Ghana that has been untouched, so to speak, even though there are strong indications that militant groups are using Ghanaian territory as a place of rest and recuperation."

Says Mr Sawadogo, "Any involvement of the army in political affairs worsens the nation's social and security situation... It's a last resort. Every coup in Burkina Faso has set back the country's progress."

"Acclaim fades when people become aware that the army in power have no greater leverage in peripheral areas than civilian governments," agrees Mr Moncrieff.

Ghana's President and Ecowas leader Nana Akufo-Addo, told the BBC that "the initial evidence doesn't point to the fact that Mali is doing anything better about the insecurity and the fight against the jihadists than the civilian government."

Says political scientist Idrissa, the show of military might, such as raids and crackdowns on armed groups, are ultimately not enough to establish the staying power of the state, he adds. For that you need a reformed state, able to keep control of its territory. 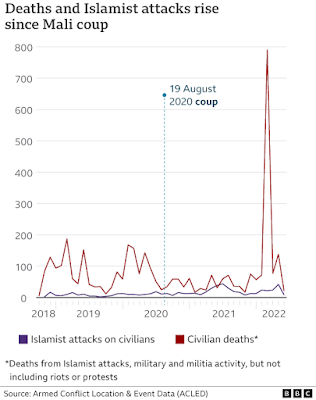 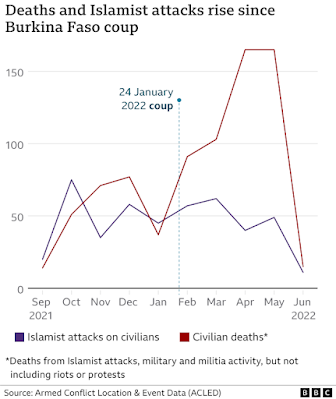 Posted by ajohnstone at 2:23 AM