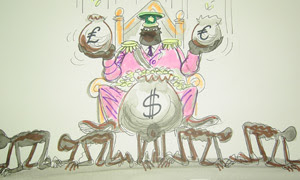 As usual , it is the workers that are being used as pawns in the political battle of the elites .

The wave of post-election violence in Kenya is hurting mainly the poor rather than the politicians who caused it but who are safe inside their gated compounds, an Italian slum priest said. Father Daniel Moschetti has worked for 15 years in Nairobi's Korogocho shanty-town.

"This is a war of the poor. The slum residents are suffering," he said. "We have no food, no water. We have no communication with the outside world, whilst politicians are creating the conditions for civil war."

"Kenyans have shown a much greater maturity than politicians, but it is the politicians living in their secure compounds who are inciting ethnic hatred," Moschetti said. "The future of this country is in the hands of people who have no wisdom. They are blinded by pride and cannot see their people dying."

The death toll from ethnic riots triggered by President Mwai Kibaki's disputed re-election approached 250 .
The Times explains that every election since multiparty politics was reintroduced in 1991 has involved rigging. So far the margin of victory has always been so great that Western diplomats - keen to maintain “stability” - could claim that the cheating would not have made a difference to the result. “Voting broadly reflected the will of the people” was their duplicitous phrase that allowed the ruling elite to play their quinquennial charade. Now the margin of victory is too thin. The cheating did make a difference and Raila Odinga, the leader of the main opposition party that has won the largest number of seats in parliament and six out of eight provinces, is not going to accept defeat.

Kenyan politics are more than a lucrative game of musical chairs for the elite. They are the most vicious and tribalised on the continent. Politicians often address their own people in coded language. “It is our turn to eat!” is a phrase they often use. It means that it is the turn of our ethnic group to rule — and loot as much as we can.
“This tribalism was started by Jomo Kenyatta, perfected by Moi and super-perfected by Kibaki,” said Elvis, a young accountant living in Kibera. He refused to give his surname as it would reveal his tribe , one of 42 different ethnic tribes
Intense internal and international pressure forced Mr Kibaki to appoint John Githongo, a former journalist and corruption campaigner, as anti-corruption czar. Mr Githongo commissioned Kroll, a private security firm, to trace, freeze and return the money lodged in accounts all over the world. but once these details became available to senior figures in Kibaki's Government, the second and third stages of the process, freezing and recovery, were abandoned. Mr Githongo fled for his life and, even in a British haven, was given an armed bodyguard. The Kenyan elite have a history of killing people who ask questions about corruption.

The Financial Times comments as western leaders scramble to prevent Kenya’s descent into chaos they should find time to consider their own failure to respond to a crisis that has been long in the making. For the first time in Africa’s post-independence history, an insider was ready to reveal how corruption worked – with evidence that included secretly taped conversations with cabinet ministers. Britain and other aid donors were given an opportunity to tackle corruption, using as leverage aid that exceeds $16billion since independence in 1963. Britain chose not to act on Mr Githongo’s evidence. Instead, it has been business as usual. They did not believe it was ultimately in their interests to have a showdown with the barons of corruption. They did not want to upset what they saw as a regional “island of stability” from which the UN and other international relief agencies, including hundreds of foreign non-governmental organisations, operate – a thriving business that accounts for a fifth of Kenya’s annual foreign exchange earnings.

If aid has worked in Kenya, how do development agencies explain the growing pauperisation of its people? In 1990 about 48 per cent of the population was living below the poverty line. Today, more than four decades after independence, nearly 55 per cent of Kenyans are subsisting on a couple of dollars a day. And for all the 6 per cent annual gross domestic product growth achieved in the past two years under Mr Kibaki, the gap between the haves and the have-nots is widening. To see the crisis only in terms of tribal allegiances and ethnic clashes is to miss a vital element in the Kenyan picture. The population has doubled in 25 years to 31million Unemployment is growing, and the number without land is growing.

For these people there is nothing to lose by taking to the streets, driven by frustration and fury that transcend their tribe.
Kenya is paying a terrible price for the tolerance of its corrupt government by its western partners.
If history is anything to go by the only ones who get to “eat” are the rich and well-connected. The poor, whether Kikuyu, Kalenjin or Luo, remain poor.