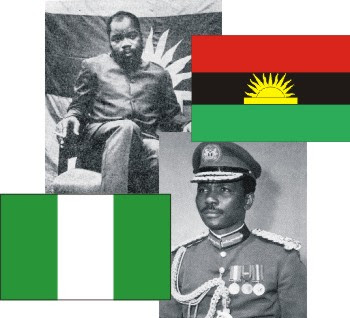 Nigeria is a country that was created artificially by British colonialism. It has a complex ethnic mixture of groups, with a division between the North, inhabited by Muslim Fulani Hausas with a rigid feudal system, and the South where the a number of different ethnic groups co-existed loosely, the largest of these groups being the Christian Igbos and Yorubas. The trick of British colonialism was the divide and rule system. They knew the nature of Nigeria; it is a country that doesn’t have the same climate, not the same religion, not the same mentality, not the same food, not the same dress, not the same dialect, and not the same culture. They used their military might to force Nigeria to be one by the amalgamation of the southern and northern protectorates of Nigeria. They gave the Fulani emirs political prominence at the expense of the Southern population and left a time bomb with the fuse burning.
Prior to independence, and afterwards, many threats of a Northern secession were made by the Northern politicians because they did not want to be part of Nigeria. But in realty these Northern political kangaroos called leaders did not want to lose the benefit of Southern oil and industries. Nigeria was supposed to get her independence before the Gold Coast (now Ghana) did in 1957 but, because of the Northerners were not prepared to be part of the new country, Nigeria lost many years in debate and compromise until the North agreed to be part of it.
But the new Nigerian constitutional framework did not resolve everything, it being clear that Nigeria was sitting on a time bomb that would explode and cause real dangerous harm to all Nigerians.
The constitution did not change the relative cultural backwardness of the North compared to the South. What the Northern leaders wanted was a guarantee that they would retain their dominant political position after independence. If not, they would pull out and form an "Arewa Republic" for the interest of the Fulani – Hausa. British imperialists taught that the North were fools to be used and stole the resources from the South. But, the North got their way in political domination in Nigeria.
In the mid-60s, the South had more doctors, lawyers and engineers than most other countries in Sub-Saharan Africa. There were 1.3m Igbos from the South East working in the northern region, many of them in skilled positions, particularly in the civil service. The Northern leaders were jealous of Igbos and other Southerners, accusing the Igbos of depriving northerners of good jobs due to their better education.
Military rule
In 1966, a group of young officers assassinated the Northern leader Bello, the federal Prime Minister Tafawa Balewa and the Western leader Akintola who had become discredited in the eyes of the population. The coup leader, Major Kaduna Chukwuma Nzeogwu (now dead) broadcast the following reasons for the coup on radio:
"Our enemies are the political profiteers, swindlers, men in high and low places that seek bribes and demand ten percent, those that seek to keep the country permanently divided so that they can remain in office as Ministers and VIP’s of waste, the tribalists, the nepotists, those that make the country look big for nothing before international circles".
In the North, jubilant masses ransacked the governor’s palace and cheered the coup leader, despite his Igbo origin.
The coup did not succeed. In Lagos, General Thomas Umunnakwe Aguiyi Ironsi had restored peace and order in the name of the old government with British backing. He placed himself as the first army general at the head of the federation and declared Nigeria under military rule.
Despite opposition from Northern politicians, General Ironsi announced his "Unification Decree" which although it changed little but names – regions became provinces, the federation became a Republic – caused a series of the most violent massacres of Southerners yet seen in the North.

"Armed thugs moved across the space between the city walls of Kano and the Sabon Garis where the Easterners lived, broke into ghetto and started burning, raping looting and killing as many men, women and children from the East as the could lay their hands on".

It is without doubt that these massacres were deliberately planned by Northern politicians using their own armed gangs to whip up local feelings against the Igbos and other Southerners.
General Ironsi then went on a tour to Ibadan, Western region, to promote "One Nigeria" ideal. While he was on this tour another coup was staged, by Northern army officers. General Ironsi and two of his commanding officers were stripped, beaten, tortured and then shot. With taking over command, the coup leader, led by a young British trained officer, General Gowon, issued instructions for Igbos in the army – many off them formed the majority of the technical corps – to be rounded up and imprisoned. And Gowon declared himself the supreme commander of the Nigerian armed forces.
The British High Commission in Lagos after meeting with the coup leaders came out in their full support – including their demand for recognition of the dominance of the North in any political process. All the regions except the South Eastern region – where the former governor, colonel Chukwuemeka Odumegwu Ojukwu, remained in command with his troops and refused to recognized the new dictatorship. This Ojukwu, son of a millionaire who had been knighted by the British, had been educated in Oxford Universty and Sandhurst college, saw the atrocities of Gowon and decided to lead the South-East to secession and war.
During September and October 1966, three months after Gowon’s takeover a large scale massacre of Southerners was reported again from the Northern region. To quote the Observer (17 October 1966):
"The Hausas in each town and village in the North know what happened in their own localities, only the Igbos know the whole terrible story from the 600,000 or so refugees who have fled to the safety of the Eastern Region – hacked, slashed, mangled, striped naked and robbed of their possessions; the orphan, the widows, and the traumatized. A woman, mute and dazed arrived back in her village after travelling for days with a bowl in her lap. She held her child’s head, which was killed before her eyes….after a fortnight the scene in the Eastern Region continues to be visible of the ingathering of exiles into Israel after the end of the last holocaust."
The killing of Igbos in the North was no more a joking matter.

Edit this piece so that everything is the same font. The bottom half is large and bold on my screen. Also, isn't most of the Yoruba muslim? The article made it seem that Yoruba and Igbo are Christian.