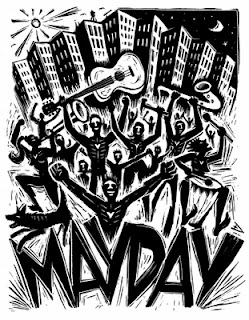 On the occasion of May Day, the day of the international solidarity and unity of the working class, the World Socialist Movement extends warm revolutionary greetings to the entire working class of the world. Every year on May 1st, workers around the world celebrate their victories, remember the fallen and commit themselves to the fight for a better life. May Day is a day to remind the world that the worker`s labour is the wheel around which our world revolves.

The challenge before us is to widen the unity of the working class and carry forward the fight against the exploitative system of capitalism and to struggle against those divisive forces which seek to divide the people on nationality, tribal or religious or by gender lines. On this May Day, workers must be resolved and say that no more shall we allow capitalists to use one of us against another and no more shall we be divided and diverted from championing our class interests and confronting our common class enemy - the capitalist.

Socialists fight against social oppression and champion the cause of the downtrodden. We celebrate this May Day surrounded by continued working class suffering  In the midst of the world economic crisis, employers and government lackeys, at their behest, endeavour to crush the collective resistance of the workers and trade unions in defence of their democratic rights and livelihood. In many work-places around the continent, even the initiative to form trade unions is attacked with victimisation. Workers are punished with dismissal and other punitive measures by employers for organising themselves into trade unions and even murdered by police or the hired goons of bosses.

The WSM  urges workers to step up the campaign against the further degradation of their working conditions and living standards and to recognise that the struggle to build a new and better Africa cannot be led by those who benefit from its poverty and inequality and pursue policies to entrench these very same injustices.

May Day is a day to urge all workers of the world to unite and break the chains of oppression and exploitation. Forward to a socialist future!
Posted by ajohnstone at 2:31 AM