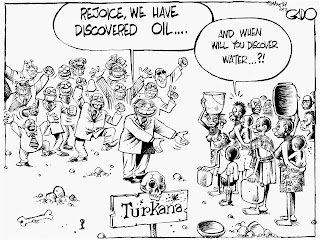 Although just a few hundred kilometres from Nairobi, the county of Turkana feels more like a million miles away from the gleaming skyscrapers and concentrations of power and money found in Kenya’s capital. Locals speak of “Kenya” as if it were an entirely different country and of “Kenyans” - or “the people with long trousers” - as if they were foreigners.

Turkana’s socioeconomic indicators do indeed set it apart. More than 96 percent of its predominantly pastoralist population are categorized as poor, the highest proportion in the country. Turkana also trails near the bottom of national leagues in terms of employment, literacy and healthcare spending.  Only 39 percent of the youth aged 15-18 in Turkana attend school, compared to the national average of 70.9 percent. With climate change, cattle-raiding and agricultural development the viability of the pastoralist livelihood is eroded.

Newly-confirmed oil reserves are set to go on stream in the next few years. “Until recently many people did not know what oil as a resource means. Most of them were asking if water could instead be drilled for them,” said Lokichar resident Robert Kamaro.

“Oil is being seen as a ladder to help the people go up,” said Christopher Ekaru Loskipat, coordinator of the Catholic Peace and Justice Commission (CPJC) in Lodwa “When the companies come here, the local people expect employment. If this is not done, we are anticipating conflict. What will the government trickle down as the benefit to the community?”

But according to oil industry analyst Antony Goldman, no major jobs bonanza is on the horizon. "Typically oil is capital- rather than labour-intensive: unlike mining, it does not yield many unskilled or semi-skilled jobs,”

“The government needs to build schools for our children, drill boreholes. We believe that we will benefit, especially the vulnerable,” Simon Esekwen, who lives close to Lokichar.

Rather, the real impact of the oil find will be on land prices and government revenue.

Joseph Elim, coordinator of Riam Riam, a local NGO said, “I heard some people ask, `What will happen to pastoralists?’ or `Will they deport us to Sudan?’ There is a need for information to counter the alarmists. The people are saying: `We do not want people with long trousers coming here because they have colluded with those who have sold the land’." People in Turkana are also worried about being left out of any appreciation of land prices that are likely to arise from development of the oil field. Land in the county is communally owned, and managed by the county council. “When the oil was found, people started saying, `Now we are in Kenya, good things are coming out of this place’. But coming from a pastoral community that did not attach monetary value to land, now they wonder: `What about this whole mass of land that investors are going to be interested in’?”

“Here we do not have title deeds, people live without documents,” said the CPJC’s Loskipat. “The situation will be threatening for those without land documents and some people may capitalize on this. There is a possibility that at the end of the day the vulnerable will easily give away their land or sell it at throwaway prices,” he said.

For many, the very concept of individual land ownership is as alien as the “men in long trousers”. “How can you sell soil?” asked one young man in Lokichar.

Source
Posted by ajohnstone at 7:29 AM