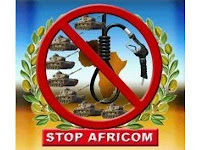 "The committee believes that activities that utilize U.S. Special Operations Forces and an 'indirect approach' that leverages local and indigenous forces should be used more aggressively and surgically in Africa..." Report of the House of Representatives Armed Services Committee on the National Defense Authorization Act for Fiscal Year 2013.

On May 16, General Ray Odierno, the Army chief of staff, announced that AFRICOM, the American military mission in AFRICOM, would expand its activities, sending soldiers throughout the continent in a new plan of training, and it would involve a new combat detachment.

Africom was set up four years ago to pioneer a new form of defence, encompassing diplomacy and development. To avoid future high-profile wars, commanders were told to focus on “smart power”: training national armies to neutralise threats before they reach the headlines. To do this, the Americans needed good relations with African leaders. Many who were initially suspicious of the Pentagon, Nigeria and South Africa, the continent’s military giants, have warmed to Africom in the past year. More than three-quarters of Senegalese officers have been to American war colleges. AFRICOM has trained thousands of officers on the continent, including the young captain that overthrew his own government in Mali. The US announced it was sending troops to no less than four more African countries – the Central African Republic, Uganda, South Sudan and the Democratic Republic of Congo. AFRICOM have now announced an fourteen major joint military exercises in African countries for 2012.

But the Libyan campaign has reignited fears of American domination, suspicions which are understandable. When Africans raise concerns about Africom they are said to suffer "misconceptions, misapprehensions, rumours, and fiction." The US Congress happily pays for weapons but despises development aid. Acquisition and control of Africa’s resources is the chief purpose of Africom, not the development of Africa. Africom serves the interests of the United States of America. Since African and American interests never gel, it would mean that AFRICOM would pursue American interests, on African soil, at the expense of African interest. And as a result of this military alignment, the United States is able to secure access to natural resources. Capital is not withdrawing from Africa, but instead, the extraction of its natural wealth is becoming more obvious and open.This is the context in which the US is devoting more resources to its AFRICOM division.

America and NATO have the worst records in their dealings with the African people. In Libya, they bombed the country into submission to impose regime change. Gadhafi’s sins weren’t crimes against humanity but that he was a problematic partner for international oil companies, frequently raising fees and taxes and making other demands.

WikiLeaks revealed how AFRICOM planned the assassination of President Mugabe and the fall of his government through the so-called Operation Shumba.

Despite America's language about a multilateral, interagency approach against the Lords Resistance Army, it is apparent that, in practice, the military far outweighs diplomacy and development in U.S. foreign policy today.“Given their budgetary and political superiority to State and USAID, AFRICOM will likely take the lead in developing and executing this strategy,” says Daniel Volman, Director of the Africa Security Research Project. The 100 American military advisers working  with army troops from Uganda and the Central African Republic to catch Kony has not stopped the LRA’s violence, so far this year there have been 50 attacks, nine deaths and 90 abductions

Would the United States of America government be prepared to allow Russia or China to establish their own  "Americom" in pursuit of their national interests in America?

Posted by ajohnstone at 6:29 AM

Email ThisBlogThis!Share to TwitterShare to FacebookShare to Pinterest
Labels: AFRICOM