US, AFRICOM and AFRICA: Accumulation By Any Other Name

“The countries that cooperate with us get at least a free pass,” acknowledged a senior U.S. official who specializes in Africa but spoke on condition of anonymity to avoid retribution. “Whereas other countries that don’t cooperate, we ream them as best we can.” (ream, N. Amer. clear out or remove (material) from something)
WP

This has been the essence of US foreign policy as it is actually practiced for the past several decades. It has escalated over time, particularly in the 1980s under Reagan, and with the proliferation of pointless wars this century begun by Bush and expanded under Obama. I say pointless, because although there may have been objectives, they were not related to the means used to achieve them, or to the eventual outcomes, in any coherent way. The US has tried to solve political problems with the brute force of military power. US foreign policy appears divorced from the realities of who what when where and why the US is conducting its policy. The result has been destruction without achievement. US policy in Africa continues this pattern. The destruction of Libya is the most aggressive recent example.
AFRICOM – a map of US military presence in Africa, countries where the U.S. has recently, as of spring 2013, conducted exercises, operations, or has bases in Africa. 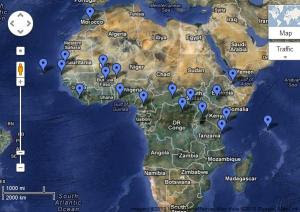 Map of known US military locations in Africa.
The interactive version of the above map courtesy of John Reed in Foreign Policy.