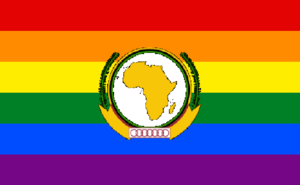 Cameroonian Roger Jean-Claude Mbede, being gay came with a prison sentence, and ultimately, a death sentence. He died at the age of 35 in his home village of Ngoumou due to complications from a hernia he developed while in prison that never got proper treatment. Jean-Claude was imprisoned after he sent a text message to another man, which read: "I think I am very much in love with you." In Cameroon, because of homophobic laws that were personally championed by President Paul Biya, that was enough to be considered a criminal offense, punishable with time in prison.

The same weekend that Jean-Claude died, Nigeria enacted a new law that criminalizes freedom of speech, association and assembly as well as the activities of many human rights and civil society organizations working on behalf of members of the LGBTI community. The law provides for a 10-year prison sentence for anyone who supports, meets with or forms a group advocating for human rights for LGBTI people. Reports are already surfacing of arrests of those suspected of being gay. Similar legislation in Uganda needs only the signature of President Yoweri Museveni before becoming yet another repressive law which will even make it a crime not to report gay people to the police. In Liberia, a religious gathering has been collecting signatures pushing the government to sign a law banning same-sex marriage. In South Africa, the past five years have seen the rise of hate-crimes against gay people, including a phenomenon known as "corrective rape" - rape committed with a view to alter the victim's sexual orientation.  Homosexuals have been branded “vermin” by Gambia’s president Yahya  Jammeh in a new low over its anti-gay rhetoric. “We will fight these vermins called homosexuals or gays the same way we are fighting malaria-causing mosquitoes, if not more aggressively,” Jammeh said “As far as I am concerned, LGBT can only stand for Leprosy, Gonorrhoea, Bacteria and Tuberculosis; all of which are detrimental to human existence,” he added.

Homosexuality is a crime in 38 of 54 sub-Saharan countries but there exists a strain of cultural relativism that has allowed the apparent misconception among some people, both in Africa and the west, that homosexuality is an imperialist import and that those opposed to the human rights of gay communities are simply reclaiming their pre-colonial cultural values. It has become something of a catechism to proclaim that homosexuality was introduced to Africans by European colonisers. In August 2013, in his seventh inauguration speech, President Robert Mugabe was particularly derisive of the gay community. He urged young Zimbabweans to shun homosexuality as an abomination of humankind "that destroys nations, apart from it being a filthy, filthy disease". That speech relied on an unhealthy dose of homophobia, effectively using existing public disdain for homosexuality as a means to delegitimise the political opposition - with its liberal economics and politics - as part of the evidence that it was merely a puppet of the West. But Mugabe is certainly not alone in abusing the gay community for political gain.

Any person with the time to study the history of sexuality in traditional African cultures will discover that this claim is baseless. Indeed, the history of sexuality in traditional African societies has always been characterised by diversity in sexual practices and identities. Homosexual practices and identities are not new to Africa. What is new is the campaign for LGBT rights that has arisen in reaction to the revival of a homophobic legal and religious tradition inherited from European colonialism. For many, the apparent surge in anti-gay sentiment is only a response to the pressure being put on African governments by western governments, to, ironically, "act a certain way".

The movement against LGBT rights in Africa has brought together very strange bedfellows, African Muslim and Christian preachers with strong backing from rightwing American Christian organisations. This has culminated in the steps taken recently by the governments of Uganda and Nigeria, for example, to pass laws that criminalise same-sex relationships and impose very stiff penalties for anyone found guilty under such laws. The dehumanisation of members of the gay community across Africa has been justified by invoking both God and traditional African culture. However, for over a century the same religious groups now claiming to be the custodians of traditional African cultures have been at the centre of programmes to systematically efface Africa's traditional cultures on grounds that, in their view, such cultures are un-Christian and un-Islamic. Thus, the position adopted by many of Africa's political and religious elites on issues relating to LGBT rights owes more to their colonial religious education than it does to their traditional African roots. The very existence of "sodomy laws" imposed on many African cultures by British colonial rulers in an attempt to stem what they thought of as the sexual immorality of African cultures point to the presence of diversity in sexual practices among Africans prior to their encounter with Europeans.  So to suggest that Africa has no place for homosexuals is to imagine the continent's history as beginning when prude missionaries brought Bibles, long skirts and umbrellas as a marker of civilisation. The construction of sin and categorical notions of sexuality over the past four centuries on the continent are inextricably linked to colonialism, the Church and the ambitions of the state.

Some opponents of gay rights in Africa have consistently tried to argue that since there is no word for homosexuality in their African languages it must mean that gays did not exist in African societies until recently. This claim would first have to be proved through a kind of "linguistic archaeology" on all such languages. This has not yet been done. It is also unlikely to work on languages and meanings that evolved as they were passed down from one generation to another through oral means. The absence of words for homosexuality in some African languages, if this is true, is in itself proof that gay people were never considered as existing outside of the norm in such traditional African societies. Thus, it is more likely that the language of "othering" now used to discuss and describe gay communities in Africa is a remnant of colonialism. The move to specifically target homosexuals, the way Nigeria and Uganda have done, legitimises homophobia. And in so doing, it washes away actual history, and creates a new one, just as colonialism bid us to do.

Even as economies continue to grow (or at least the GDPs) and middle classes emerge sporadically, rampant inequality burns holes in the aspirations of the continent. Where then does this leave the gay community? They've merely become a red herring,  to divert attention from the failing economies and the many weak democracies across the continent and the need for many governments to seek support in alliances with religion. Gays are the new scapegoats for the problems of capitalism

Adapted from here
Posted by ajohnstone at 5:15 AM