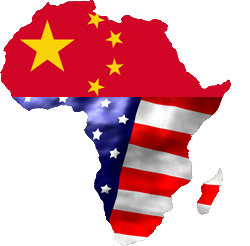 The United States is not the first country to host more than fifty heads of African countries at one time. China welcomed African leaders to Beijing in 2000 for the inaugural Forum on China-Africa Cooperation (FOCAC), and has since held five additional FOCAC summits.

China’s trade with Africa rose to $200 billion in 2013 – largely Beijing’s imports of natural resources and exports of electronics and textiles – more than double U.S.-Africa trade levels.

Obama has already announced $14 billion in commitments by U.S. companies for investments in Africa’s construction, manufacturing, energy, finance, and technology sectors that pales in comparison to Beijing’s  $75 billion in aid projects from 2000 to 2011. Foreign direct investment (FDI) inflows from Beijing have also increased six-fold since 2005, to $2.5 billion in 2012. Development assistance in the form of interest-free loans, grants, and concessional loans totals $14.41 billion between 2010 and 2012 alone.

U.S. direct investment in Africa essentially flat-lined between 2010 and 2012, according to the Brookings Institution. Over the same period, China (with investment up 68 per cent) and the European Union (up 8 per cent) poured money into a region they see as rich with natural resources and economic potential. U.S. corporate profits in Africa fell in 2013 for a second straight year. Chinese companies seem to be everywhere in Africa. The off-shore oil company CNOOC has invested $2 billion in a Ugandan oil field. Chinese operate supermarkets and mines. A Chinese construction company is building Uganda's first expressway with a loan from Chinese bank.

Of course Socialist Banner cannot overlook that Obama pledged $550 million to support its proxy armies in Africa. The United States announced  plans to spend $110 million a year over the next three to five years to help African nations develop 'peacekeeping' forces. The United States would partner with Senegal, Ghana, Ethiopia, Rwanda, Tanzania, Uganda to develop rapid response forces. It also plans to spend an initial $65 million to bolster security institutions in Ghana, Kenya, Mali, Niger, Nigeria and Tunisia. Another program, the Security Governance Initiative, would aim to strengthen border security.

The United States has claimed it has trained more than a quarter-million African troops and police.  "We'll have increased training, particularly to train the trainer and to train specialized enabler units," an official said.

From here
Posted by ajohnstone at 6:10 AM