The government of Zambia has defended its efforts to kick London-listed copper miner Vedanta Resources out of the country, in an escalating row over tax and alleged underinvestment. Local suppliers in Zambia’s mining region, known as the Copperbelt, had been made to wait for payments, hurting the local economy.


The nation’s national mining vehicle, ZCCM, is seeking to have Vedanta subsidiary Konkola Copper Mines (KCM), its partner in the country’s largest copper mine, placed into liquidation.
The Zambian government, including its president, Edgar Lungu, has accused KCM of underpayment of dividends and taxes, as well as underinvestment in the mine, a crucial plank in Zambia’s copper-fuelled economy.
“We need the dividends from that mine to invest in schools, to invest in hospitals,” the Zambian information minister, Dora Siliya, said. “We can’t keep talking like this over and over. We want a partner that we can work with so we can invest elsewhere. The time for mediation is over.” 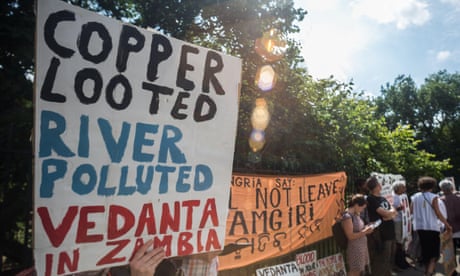 Read more
“This is not nationalisation, it is not compulsory liquidation, it is following law.”
One source within the Zambian tax authorities said the company owed about $100m (£82m) in VAT, customs duties and other taxes, even once refunds due to the company were taken into account. The source added that KCM, which has previously been criticised over pollution, has also withheld $10m (£8.2m) in dividend payments.
“On the balance of numbers they owe the government more than they are owed. They’ve not been consistent in meeting their tax obligations. It’s a worsening situation.”
https://www.theguardian.com/world/2019/aug/05/zambia-seeks-to-expel-london-listed-copper-miner-vedanta

Posted by ajohnstone at 3:35 AM