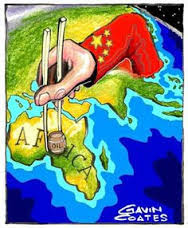 A $55m (£39m) deal struck by the government of Sierra Leone with China to build an industrial fishing harbour on 100 hectares (250 acres) of beach and protected rainforest has been criticised as “a catastrophic human and ecological disaster” by conservationists and rights groups. It would destroy pristine rainforest, plunder fish stocks and pollute fish breeding grounds and several ecosystems.

Black Johnson beach fringe the African nation’s Western Area Peninsula national park, home to endangered species including the duiker antelope and pangolins. The waters are rich in sardines, barracuda and grouper, caught by local fishermen who produce 70% of the fish for the domestic market.  The beach is on Whale Bay, so-named because whales and dolphins are seen there.

The government said the beach, one of many along the nation’s 250-mile (400km) coastline, was the “most suitable place” for construction  for a harbour for tuna and “other bigger fishing” vessels exporting to international markets, it said. It would include a “waste-management component” to “recycle marine and other wastes into useful products”.

The Institute for Legal Research and Advocacy for Justice (ILRAJ) and Namati Sierra Leone, have written to the government, under the 2013 Right to Access Information Act, demanding to see the environmental and social-impact assessment studies, and the report showing that the beach was, as claimed, the most suitable place for construction “in terms of bathymetry, social safeguards (minimum resettlement costs) and environmental issues”. They are also seeking a copy of the grant agreement between China and Sierra Leone.

Dr Sama Banya, president emeritus of the Conservation Society of Sierra Leone, says the proposed development would have a “disastrous” impact on tourism and “the very fish industry that it’s supposed to support”

Posted by ajohnstone at 3:16 AM