Deforestation of the Congo 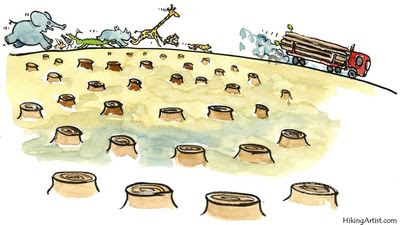 The mounting tension between economic growth and healthy forest life over years has led to the destruction of some of the world’s oldest forests and the resulting poverty of its communities. This massive deforestation has led to the expropriation of indigenous and local communities from their ancestral land without their consent, increased carbon emissions, migration and the disappearance of Indigenous communities’ culture and languages. The changes are impoverishing forest communities and leaving the entire region more vulnerable to climate change and diseases.

The current economic development model in Congo Basin is rooted in massive deforestation: more and more concessions are being granted with large scale land set aside for industrial agriculture such as palm oil and rubber. The loss of the forest ecosystem – and therefore the spiritual and cultural heritage of the community – is irreversible. The tropical rainforests of the Congo Basin are being eliminated.

According to the recent Global Forest Watch data, in 2021, 3.75 million hectares of pristine rainforest (an area critical to carbon storage and biodiversity) was lost at a rate of 10 football fields per minute. Cameroon, for instance, has lost more than 80 thousand hectares of its primary forests in 2021, almost twice area of the primary forest destroyed in 2019. The Democratic Republic of Congo has lost nearly half a million hectares of primary forest in 2021 (Increase of almost 29% compared to 2020). Only to enrich a small portion of selfish elites. At this rate, there is no way to reverse forest loss by 2030, as pledged by leaders from 141 countries at last year’s COP26 climate summit in Glasgow.

Despite that, Cameroon is still granting a company, like Camvert SA, tax exemptions to implement an almost 60,000 hectares palm plantation project. This will result not only in deforestation but also in biodiversity destruction alongside the loss of communities’ livelihoods but also lead communities in the areas in extreme poverty. The benefits of these deals, however, do not reach local residents. They are seldom hired when these concessions are developed. While companies often brag that they are promoting development by opening up roads, it’s important to note that these roads are used mainly to deliver timber to the market and are not open for communities.

The 2022 World Bank report show the country is a long way away from achieving substantial poverty reduction, with the COVID-19 pandemic keeping people below the poverty line and remaining stubbornly constant.

In DRC, a recent IGF report showed that more than USD 10 million in forest royalties were not paid to the public treasury between 2014 and 2020.

What’s worse, the climate change that this deforestation is making worse will only deepen poverty. The latest IPCC report  estimates that in the next decade alone, climate change will drive 32-132 million more people into extreme poverty.

The 2022 World Bank report show the country is a long way away from achieving substantial poverty reduction, with the COVID-19 pandemic keeping people below the poverty line and remaining stubbornly constant.

In DRC, a recent IGF report showed that more than USD 10 million in forest royalties were not paid to the public treasury between 2014 and 2020.