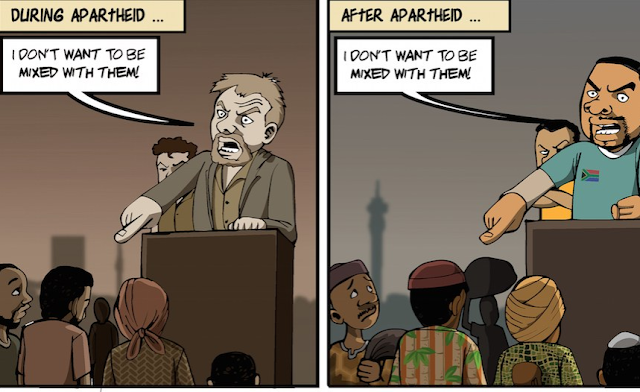 Since 1994, more than 900 violent xenophobic incidents have been recorded in South Africa, resulting in at least 630 deaths, displacement of 123,700 people, and looting of about 4,850 shops.

United Nations experts recently warned that “the country is on the precipice of explosive violence”.

More than half of the country’s population lives in poverty, with close to 12 million people hungry and 2.5 million experiencing hunger daily. The country has a Gini coefficient of 0.65, making it one of the most unequal countries in the world.

Of the more than 10 million people aged 15-24 years, only 2.5 million are active in the labour force, either working or searching for work. Over 75% of this group is out of the labour force.

A meagre 10% of the population owns more than 80% of the wealth.

A recent research paper we set out to debunk negative immigrant myths.

While there is anecdotal evidence that migrants are “job stealers”, in general, migrants do not appear to take employment opportunities from locals. In South Africa, “one {regular} immigrant worker generates approximately two jobs for locals.”.

Migrants are also more likely to be self-employed and employ South Africans.

Myth 3: Immigrants contribute to, or are responsible for, high levels of crime

Our report cites 2008 South African Social Attitudes Survey data which showed that 62% of the sample believed that immigrants were responsible for crime in the country. By 2016 it had gone up to 66%. Paradoxically, when asked who commits crime in their communities, most people say it is locals. For example, between 2011 and 2017, the national Victims of Crime surveys showed that 5.7%–6.7% of households stated that crime in their areas was caused by “people from outside South Africa”.

Statistically, there is no relationship between international migration in South Africa and crime. There is no evidence that most foreign-born nationals commit crime, or that they are responsible for most crime in the country.

Myth 4: Most immigrants are in the country illegally

Often, immigrants enter South Africa with a regular status but fall into irregular status due to poor immigration policy management. The Department of Home Affairs is struggling with a visa backlog partly due to departmental dysfunction and corruption. In addition to the department’s backlogs, the cost of applying for visas is exorbitant.

The Limpopo health MEC, Dr Phophi Ramathuba, recently came under the spotlight for berating an immigrant woman. The moment was caught on video which then went viral. Her remarks seemed to reinforce the myth that immigrants are overburdening the country’s public healthcare system. At about 6.5% of the population, it is statistically impossible for immigrants to be responsible for the national healthcare system’s failings.

Posted by ajohnstone at 9:24 AM