NGOs - No Agents of Change 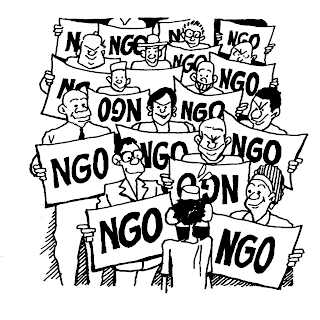 Shamelessly cut and pasted and plagiarised from here and from here

Colonial powers had no desire to finance state welfare programmes for Africans.Government social services for the indigenous population were minimal. Social policy was geared towards ensuring the integrity of the structures of colonial rule. It was designed to secure a sufficient quality of labour to guarantee a reasonably efficient exploitation of the colony. Policy formulation and implementation were usually decentralised, being delegated to the colonial
governor and administration. , colonial powers focused their attention on finding mechanisms for maintaining power through the manipulation and recasting of existing "customary" structures or dominant tribes that would defend or reinforce their own control. With "decentralised despotism" , as it has been described as , "customary" leaders that were compliant to the needs of the invading European State, be it for slavery, for Africa's rich mineral wealth, for agricultural production, or as an outlet for over-production of commodities and which involved the extensive use of Native Authorities to both define and enforce custom, backed up by the armed might of the central state, as the means for controlling, governing and exploiting rural peasantry. Europe, were nurtured and delegated power to maintain order on their behalf .
Social services were not, however, completely absent. In periods of serious outbreaks of epidemics in indigenous settlements, health services were provided principally to stave off the possibility of infections spreading into white society. Limited education also was provided when certain basic skills would be necessary for the administration of the colony or for the particular forms of exploitation. For the most part, the state's function in these sectors was to provide only for a minority. For the majority of the rural population, it was left to a clutch of charities and missionary groups to exchange their spiritual wares for material support in education, health
or other social services. In providing such services, they were also concerned with evangelising amongst the African population, discouraging what they perceived as ignorance, idleness and moral degeneracy, and promoting their own vision of civilisation.
If the welfare of Africans was not a primary concern of colonial administrators and missionaries, their control certainly was. Whites were universally agreed on the necessity for controlling the expectations and behaviour of blacks. African people did not always respond passively to colonial rule. The interwar years saw some of the first serious challenges to white authority in Africa, the emergence of significant, if nascent, nationalist and anti-colonial movements, of organised black labour and indeed of open revolt against the brute injustices of colonialism.

Missionary societies and voluntary organizations were key actors in the ideological war. They provided the administration not only with a cheap form of private welfare,but also with a subtle means of controlling the behaviour of blacks. While colonial philanthropy may have been motivated by religious conviction, status, compassion or guilt, it was also motivated by fear. In Britain and the colonies alike, politicians frequently alluded to the threat of revolution and actively encouraged greater interest in works of benevolence as a solution to social unrest. In short, charity was not only designed to help the poor, it also served to protect the rich.
Charitable organisations actively helped to suppress anti-colonial struggles. For example, in Kenya the Women’s Association, Maendeleo Ya Wanawake (MYWO) and the Christian Council of Kenya (CCK) were both involved in government funded schemes designed to subvert black resistance during the ‘Mau Mau’ uprising. The CCK established a “rehabilitation programme” in response to the emergency. It offered “pastoral care” to internees in the concentration camps, a euphemism for a process of interrogation during which “loyal Africans” were screened from potential “terrorists”. It also established community centres in Nairobi’s more troublesome slums and shantytowns to extend these “rehabilitation” services to urban communities affected by the ‘Mau Mau’ uprising.


Meanwhile the rich get richer, the poor poorer. While the average income of the top 20% of the world's population was 30 times that of the bottom 20% in 1960, by 1994 it was 78 times. Nearly one quarter of the world's people have an income that is less than $1 a day - a proportion that is rising. The UN Development Programme calculates each year the human poverty index based on a series of measures including the prevalence of illiteracy, life expectancy, degree of malnourishment, and access to health services and safe water. In 1996 over a billion people fell below this measure, the position worsening in 30 countries, the worst figures since UNDP began calculating the index in 1990. Development, it seems, is failing.

Just as the bourgeois revolution that brought the capitalist class into ascendancy in Europe led to the emergence of a particular construct of rights proclaimed against the ancien regime, so Africa's struggle against the colonial yoke gave birth to its own traditions of struggle and the construct of rights. Once thrown into power, the nationalist leadership (comprised usually of representatives of the newly emerging middle class) saw its task as one of preventing centrifugal forces" from competing for political power or seeking greater autonomy from the newly formed "nation". Having grasped political self-determination from colonial authority, it was reluctant to accord the same rights to others. The popular associations that had thrown the nationalist leadership into power gradually began to be seen as an obstacle to the new god of "development". No longer was there a need, it was argued, for popular participation in determining the future. The new governments would bring development to the people. The new government, they claimed, represented the nation and everyone in it. Now that political independence had been achieved, the priority was "development". For the present, said many African presidents, "our people are not ready" - mirroring, ironically, the same arguments used by the former colonial rulers against the nationalists' cries for independence a few years earlier. A transformation had taken place which led to a demobilisation of the popular movement that had given rise to independence. Popular organisations that had emerged out of the struggle for rights (social,political, economic or civil) were provided no further role in the process. Rights were no longer the flag around which the oppressed could rally.
A gradual shift took place where concerns about rights and justice were replaced by concerns about "development". It was about creating an infrastructure that advanced the capacity of the new ruling class to accumulate and smoothing those inefficiencies that hampered the capacity of international capital to continue its exploitation of the country. It was expected that, through trickle-down effects, poverty would gradually be eliminated. This was the agenda of "modernisation", the paradigm of development that was to hold sway until the end of the 1970s.
The victims of years of injustices, whose livelihoods had been destroyed by years of colonial rule, were now defined as "the problem. Structures of accountability and democracy that were inherent in some of the liberation movements were gradually marginalised and replaced by the ascendancy of the expert supported by bureaucratic and centralised decision making under the
guise of "national planning". Political associations were soon to be discouraged, if not actually banned, while trade unions were constrained, incorporated into the structures of the ruling party, or simply disbanded. The political hegemony of the new post-independence rulers had been asserted. Their "misuse" of the state was to become a critical factor in the distortions
brought to the development agenda. Patronage was used frequently to buy favours with different groups in the country. The purpose of development programmes was distorted to ensure progress was brought not to where there was the greatest social or economic need. Instead it was brought to where investment would serve the need to curry favour with particular social or "ethnic" groups whose political alliance was deemed useful at a particular time and where the possibilities for private accumulation by the elite were greatest. Under such conditions, it was hardly surprising that competition for access to resources increasingly manifested themselves along "ethnic" lines. With the demise or suppression of organisations
based on the struggle for rights, old social alliances based on perceived historical grievances against other "ethnic" groups re-emerged. The seeds of subsequent conflicts were already taking root.

Their capacity to attend to the "basic needs" of the population gave them some legitimacy
and allowed, in some instances, reasonable national cohesion. But the development of national consciousness, born fragile and imperfectly in the struggle for rights in the 1950s & 1960s, began to lose sustenance, its life-blood dissipating. The age of the development expert, the relief expert, and subsequently the conflict resolution expert, had arrived.

Despite much flag waving and pontificating about socialism (and in some cases about "Marxism-Leninism"), the social relations of production remained firmly within the framework of the capitalist world economy. Although those who commanded the state changed hands at independence, the structures of the state machinery were rarely transformed in any substantial or radical way. Already intimately integrated into the capitalist world economy before independence, there were to be no major shifts in the forms of production established within the country, nor changes to the terms of trade with the advanced capitalist countries. The economic framework of "underdevelopment" was left unchanged.
As repression of those who were seen to be political opponents became a feature of the new state centralising its control, many NGOs chose to remain silent about that creeping repression. Protest against repression of political opponents was largely left to (northern) human rights organisations. The dilemma faced by NGOs was that such protests could jeopardise the grants that they received from the official aid agencies (who, certainly until the mid1980s, rarely sought to comment on the excesses of African governments). NGOs, especially the Northern ones, also feared that protest could jeopardise their own relationship with the national government to whom they were beholden for a range of privileges (tax or duty exemptions etc.).There was little point, some argued, in making a fuss since "it would only be the poor
who would suffer as a result".

Development NGOs vehemently claim that their work in developing countries is neutral. This assumption of neutrality probably has its origins in the heroic work that NGOs have frequently performed in response to crises. Under such circumstances, NGOs have adopted the essential humanitarian principle that all those affected by disasters should be treated equally and receive assistance equally. Humanitarian responses should take no sides in conflicts. The problem arises when these same principles have been applied in non-crisis conditions such as those that prevail in "development" programmes or, in conditions of prolonged crises especially where, for example as in Somalia, the state itself has long ago collapsed. One of the most important roles that the state performs in any society is to guarantee the conditions for the reproduction of those social relations that enable the ruling class to continue to rule. If the state fails in that essential function, then the future of the ruling class itself is threatened. The new ruling classes of postcolonial Africa soon learned the importance of that - and those who were slow to
learn were quickly swept aside by coups d'etat or civil war.
"Development" (or the political economy, more precisely) as defined by the ruling class was the process that would be used to ensure the reproduction of the required social relations that reproduced impoverishment and injustice for the many, and rapid accumulation of wealth for the few. The fact is that many NGOs have, unwittingly or willingly, inserted themselves over the last few decades as part of the very infrastructure of the political economy that reproduces the unequal social relations of post-colonial Africa.
Posted by ajohnstone at 11:53 PM