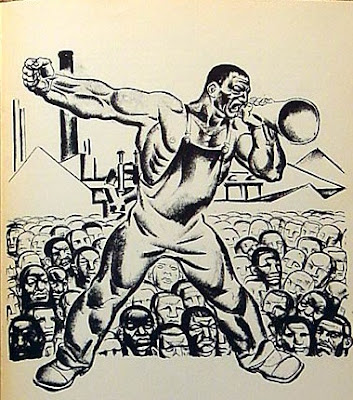 Every so often a journalist will hit the nail on the head and Socialist Banner will gladly re-print it to widen its audience . This is one such article . As Marxian socialists we maintain that it is through control of the State that capitalists protect and legitimise their power and it is the task of the working class to conquer political power and displace the ruling class .

'Seek ye the political office and everything else shall be added unto it.' Political office in Tanzania has become the fruit to fight and die for.
It is sought by all means, fair and foul. Not only politicians and business people but even medical doctors, professional economists, lawyers, academics, journalists and activists have all jumped on the groovy train towards the nirvana of political posts. What is the driving force? What is the objective?

Is it name and fame? Perhaps, but not quite, because both can be attained in a much more decent way in other fields of life.
Is it the urge to serve your fellow beings?

In today's Tanzania only the naïve and the ignoramuses believe that politicians are there to serve people. Politicians are in the game of power, period.
Maybe they love the stature and respect that a political position brings with it, but it is respect borne of fear rather than admiration.
So, what is it?

I think to understand the scramble for political offices we have to understand our socio-economy in the context of world capitalism.
Our economy is a capitalist economy, albeit a caricature. The driving force of capitalism is accumulation. In simple terms, accumulation means you use capital to make profit part of which you invest to make more profit. And so it goes on.
Some make it; others don't, while the large majority of course provides the labour power, mental and muscle, to produce profits for the capitalist.
But you need capital in the first place and people without anything but their muscle power to sale in the second place. Nature did not ordain such groups.
The world did not start with capitalists on one hand and workers, on the other. In his original scheme of things God created Adam and Eve, not a capitalist and a worker.
Original capital was created through the historical process which involved grabbing land from producers, looting natural resources from other continents (recall the pirate expeditions of Columbus and Vasco da Gamas of this world), turning human beings into chattels (slavery) and colonial exploitation and neo-colonial appropriation.
The process was violent, beastly and inhuman. Capital came into the world dripping head to foot with sweat, blood and tears. The history of capitalism has been violent and continues to be so, whether violence is used to loot gold and silver (the Americas of yester centuries) or oil and gas (the Middle East and Africa of today).
In its search for profits, capital is ruthless. Popular images like 'big fish eating small fish' or ubepari ni unyama (capitalism is beastly) are a true description of the system.
Edward Heath, the British prime minister in the 70s, is credited with trying to give capitalism a human face. But throughout its history capitalism has never had a human face, if one looks at its whole face.
Capitalism is a world system and its ugly face has been most blatant on the continents of the third world, particularly Africa. Since Thatcher and Reagan, no one even cares about hiding capitalism's ugly face; rather they give it the false garb of globalisation where Africa is the backyard (uani) of the global village.
The white man's burden today is to eradicate poverty in Africa because in the words of Tony Blair, the warmonger of Iraq, 'poverty is a scar on the conscience of the developed world'.
So we all sing 'make poverty history' without understanding the history of poverty. Some of our leaders had to go to Harvard to understand 'why poverty'!

In the industrial phase capital made profits by first producing commodities-industrial goods. In the present phase financial capital produces profits without producing any commodities; it makes profits simply by moving money from one place to another.
That is how the Soros of this world have made their billions. We have our own small examples, bordering on the farcical.

The other day newspapers reported that the Government had decided to withdraw its deposits of trillions of shillings from private banks.
The banks were using the money to buy treasury bonds from which they got secure interest. So you use the tax payer's money to get more money from the tax payer through 'their' government without ever going through the process of lending for production. In any case, we are told, Watanzania hawa kopesheki (Tanzanians are not credit-worthy.)
No doubt, the big time 'primitive accumulators'-mining and timber companies, banks and financial houses, etc.-are the multinational sharks. But they need local daggas to facilitate their grabbing enterprise.
And the local daggas then indulge in their own 'petty primitive accumulation' in the interstices of grand 'primitive accumulation'.
Public offices thus become the means of 'private accumulation'. Examples abound, whether this is in the mining or the financial sector.
I need not name names lest the publishers of the newspaper are dragged to court:you know, we are a country that follows rule of law.
Don't be insolent to ask whose law rules, you may be sued for defamation!
So now we know the story, or at least begin to understand the story of the scramble for public offices.
Public office today is the shortest cut to participate in the process of globalised 'primitive accumulation'. The historical process of 'primitive accumulation' centered in the North gave it the industrial revolution which in turn developed them and helped to beautify the ugly face of capitalism in those countries, leaving us with its ugly face.

The new form of globalised 'primitive accumulation' seems to beautify the faces of tiny elites in our midst while deepening its ugly face for the masses.
No wonder some of our historically perceptive young people are comparing our 'globalised leaders' with the localised chiefs and akidas of yester years.
Issa Shivji - The Citizen (Dar es Salaam)
10 November 2007
Posted by ajohnstone at 9:41 PM