Africa in the Oven 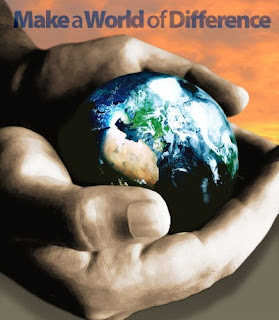 Oxfam says global warming is altering the human food supply and threatening some of the world's poorest people with hunger. At the United Nations Conference on Climate Change in Bali, the group argued developed countries should pay to address the problem, and costs could top $50 billion a year.
The United Nations predicts that in some African countries, crop yields could fall by half. Gains made in human development in Africa may be reversed if climate change is not checked.

“Ultimately, climate change is a threat to humanity as a whole. But it is the poor, a constituency with no responsibility for the current ecological debt, who face the immediate and most severe human costs,” says UNDP administrator Kemal Dervis

Among the threats to human development, that African countries may have to deal with, is breakdown of agricultural systems due to increased exposure to drought, rising temperatures and more erratic rainfall, leaving up to 600 million more people facing malnutrition.
Global warming also poses health risks, with an additional population of up to 400 million people threatened with malaria, which is one of the leading killers in the tropics.
Semi-arid areas of sub-Saharan Africa, with some of the highest concentrations of poverty in the world, face the danger of potential productivity losses of 26 per cent by 2060.
UNDP warns that if the status quo prevails, an additional 1.8 billion people in Africa and other areas will face water stress by 2080, a trend that is worrying considering the fact that water scarcity has been one of the limiting factors to agricultural production.

Yet industrialised countries have only allocated about US$163 million towards helping the Least Developed Countries adapt to global warming - less than what Canadians spent on hair conditioner last year - says a new report by Oxfam. And just only less than $10 million of this has been dispensed so far .

However , lets not be under the impression that cash-aid will be a panacea for the problems that will face Africa in the future from climate chnge . Nor other such financial solutions proposed such as carbon taxes; a passenger levy on international air travel; revenue from carbon-allowance auctions; transaction levies in national and global carbon-trading schemes; and redirecting distorting fossil-fuel subsidies.

As December's Soicialist Standard states it is the capitalist economic system itself which is responsible for ecological problems. In fact, not only have workers no influence over the decisions taken by enterprises but those who do have the power to decide - the capitalists - are themselves subject to the laws of profit and competition. Capitalism can only function in the interest of the capitalists, no palliative, no rearrangement, no measure, no reform can subordinate capitalist private property to the general interest.
We can only “cure the planet” by establishing a society without private productive property or profit where humans will be freed from the uncontrollable economic laws of the pursuit of profit and the accumulation of capital.
A world in which the present system of rival States will be replaced by a world community without frontiers, the rationing of money and the wages system replaced by free access to the wealth produced, competition replaced by cooperation, and class antagonism replaced by social equality.
Posted by ajohnstone at 12:12 AM