One Laptop per Child 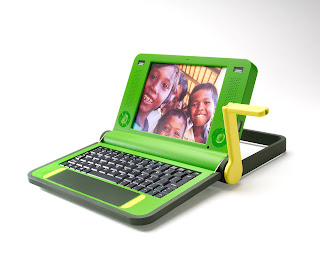 A little bit of realism from PC Mag and their writer John C Dvorak about philanthropic gestures.
Hands Across America, Live AID, the Concert for Bangladesh, and so on. The American (and world) public has witnessed one feel-good event (and the ensuing scandals) after another. Each one manages to assuage our guilt about the world's problems, at least a little. Now these folks think that any sort of participation in these events, or even their good thoughts about world poverty and starvation, actually help. Now they can sleep at night. It doesn't matter that nothing has really changed.
This is how I view the cute, little One Laptop per Child (OLPC) XO-1 computer, technology designed for the impoverished children of Africa and Alabama. This machine, which is the brainchild of onetime MIT media lab honcho Nick Negroponte, will save the world. His vision is to supply every child with what amounts to an advertising delivery mechanism. Hence the boys at Google are big investors.
Before you cheer for the good guys, ponder a few of these facts taken from a world hunger Web site.
In the Asian, African, and Latin American countries, well over 500 million people are living in what the World Bank has called "absolute poverty." Every year, 15 million children die of hunger. For the price of one missile, a school full of hungry children could eat lunch every day for five years. Throughout the decade, more than 100 million children will die from illness and starvation. The World Health Organization estimates that one-third of the world is well fed, one-third is underfed, and one-third is starving. Since you've entered this site, at least 200 people have died of starvation. One in 12 people worldwide is malnourished, including 160 million children under the age of 5. Nearly one in four people, or 1.3 billion—a majority of humanity—live on less than $1 per day, while the world's 358 billionaires have assets exceeding the combined annual incomes of countries with 45 percent of the world's people. Let's include Negroponte and the Google billionaires.
So what to do? Let's give these kids these little green computers. That will do it! That will solve the poverty problem and everything else, for that matter. Does anyone but me see this as an insulting "let them eat cake" sort of message to the world's poor?
"Sir, our village has no water!"
"Jenkins, get these people some glassware!"
But, wait. Think of how cool it would be! Think of how many families will get to experience the friendly spam-ridden Information Super Ad-way laced with Nigerian scams, hoaxes, porn, blogs, wikis, spam , urban folklore, misinformation, sites selling junk from China, bomb-making instructions, jihad initiatives, communist propaganda, Nazi propaganda, exhortations, movie clips of cats playing the piano, advertising, advertising, and more advertising. Do you now feel better about the world's problems, knowing that some poor tribesman's child has a laptop? What African kid doesn't want access to Slashdot?
Of course, it might be a problem if there is no classroom and he can't read. The literacy rate in Niger is 13 percent, for example. Hey, give them a computer! And even if someone can read, how many Web sites and wikis are written in SiSwati or isiZulu? Feh. These are just details to ignore.
Posted by ajohnstone at 10:33 AM

I do agree with some of your concerns, especially with regard to advertising and the way we think we can solve all the world's problems with our big ideas. On the other hand, consider this. What might happen as these laptops provide a means of communication between the impoverished children and the rest of the world? Perhaps the world will become a little smaller and we'll begin to see each other as fellow human beings instead of nameless faces on "Feed the World" commercials. Perhaps these children will do a better job at solving the unique problems of their communities than their adults counterparts have been able to do. Perhaps they don't need a classroom to learn. Food and water are crucial. But, if we limit our aid to food and water, we'll never get beyond the basic needs.

i recognise what you are saying and indeed you do have a point .

Some of your concerns are shared by others .

Nii Quaynor, professor of computer science at the University of Cape-Coast, Ghana,whose work in spreading information technology in Africa has been awarded by the Internet Society has hit out at critics who say the continent should focus first on basics like water and sanitation ,said affordable computing was "necessary" to Africa's development.

"While we need food and we need water, we also need the tools and instruments that will allow us to create food and water and take control of our development.Affordable computing is necessary. What is going to power development in Africa is going to be lower-cost user interfaces."
http://news.bbc.co.uk/1/hi/technology/7149788.stm

But ,of course ,he does work for the industry and views de-regulation and privatisation of telecommunications as the way forward to spread the internet and e-commerce .