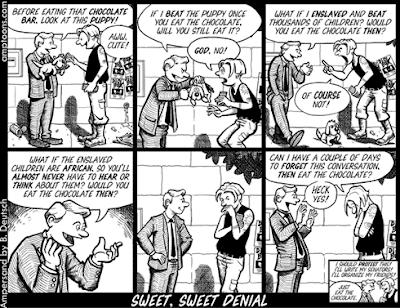 Socialist Banner have previously reported here on the child exploitaion in the cocoa producing regions and another news item reveal little has changed .

Despite the international outcry in 2000 over child exploitation on West African cocoa farms, and efforts by governments since then to regulate the industry, very little has changed for an estimated 284,000 child labourers, according to campaign groups. Ghana and Côte d'Ivoire produce about three-quarters of the world's cocoa and according to the US State Department, they employ 200,000 children. Up to 12,000 of these children have been illegally trafficked across African borders to work on Ivorian cocoa farms, according to the NGO Stop the Traffik. Many of these children are forced to work in dangerous conditions, on slave-labour wages or for nothing in order to put chocolate into the mouths of consumers .

In 2001 nine West African governments came to a voluntary agreement with the US government known as the Harkin-Engel protocol (named after the two US senators who passed it), which aimed to decrease the number of children working on farms, improve working conditions, and certify that half of the cocoa produced in West Africa would be free of exploitative child labour by 2005. But according a spokesperson for industry association International Cocoa Initiative , delays - due to conflict in the case of Côte d'Ivoire, and other burdens on resources elsewhere - meant the deadline was postponed to 2008.

"Now the industry needs to put its money where its mouth is, to get West African children off farms and back into school where they belong," said Aidan McQuade, director of Anti-Slavery International, another NGO.

But Eileen Maybin, spokesperson for the Fairtrade Foundation :
"Cocoa certification is a 'band-aid' policy - it is attempting to address the problem of child labour without addressing the underlying cause, which is low cocoa prices...Unless chocolate manufacturers are willing to pay more for their cocoa, these poor conditions on farms will persist."

The Harkin-Engel initiative is funded by governments and cocoa manufacturers, but critics say it has not provided enough money to address the root causes of the problem: that poverty drives farmers to exploit children.

It is the capitalist market that decides how humanitarian the degree of exploitation will be .
Posted by ajohnstone at 9:06 PM