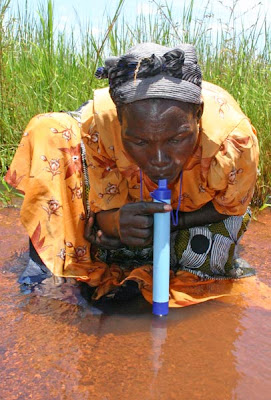 Made of polystyrene, the 31cm long, 2.9cm diametre, 150g tube, which looks like a flute and can be hung around the neck, uses filters to kill or remove 99.9 percent of waterborne bacteria and 98.7 percent of waterborne viruses, and requires no electricity or spare parts during its year-long lifetime, powered by sucking alone. It costs about US$4 and has a purification volume of 700l. The product contains a special halogenated resin that kills bacteria and viruses on contact. LifeStraw Family is designed to filter 10,000l of water in the home, enough for 18 months . Based on the same principle as LifeStraw Personal, it works by pouring water into a bucket, from which it flows through a small hose into the LifeStraw filter device, which is fitted with a small tap.

“It is something that may well have very useful applications in an emergency scenario. But it’s not a development tool, it doesn’t really solve the problem of getting water to people. This is a good interim stop-gap in an emergency where there’s plenty of water but it’s contaminated, but it’s not a long-term solution,” - spokesman for the charity WaterAid UK

Programme development officer of WaterAid America - "It is not a sustainable option for poor communities in developing countries to attempt to treat and purify water,”

IMA World Health project chief cautioned “The individual LifeStraws have only a limited role in solving Africa’s drinking water problem. It takes a fair amount of sucking power to use the straws so it is not appropriate for small children,” He also pointed out that LifeStraw was unable to filter out amoebas and giardia, a debilitating intestinal parasite, saying that this limited its usefulness and appeal.

Posted by ajohnstone at 4:21 AM

hey, here is the site i was talking about where i made the extra cash, I was making about $900 extra a month...
check it out ..

hey, here is the site i was talking about where i made the extra cash, I was making about $900 extra a month...
check it out ..