Sub-Saharan Africa’s second-largest oil producer, Angola’s capital Luanda already ranks as the world’s most expensive city for expatriates, with the presence of thousands of foreign workers, many involved in the oil industry, helping to drive up prices.

In Luanda’s Jumbo supermarket, a half-litre tub of imported vanilla ice-cream used to cost $25 (£15), testament to the Angolan capital’s rank as one of the world’s most expensive cities.
With new import tariffs imposed last month, that price has jumped to $31, enough to make even wealthy locals and expatriates pause and putting the treat even further beyond the reach of millions of poor Angolans struggling to feed their families. Angola imports three quarters of the goods it consumes.  The south-west African nation’s agriculture and industry are relatively undeveloped. They make up 17 percent of gross domestic product, compared with oil’s 41 percent.

“The tariff increases will create inflation, at least in the short term, and affect consumption, especially for those with low incomes,” says Salim Valimamade, an economist at Luanda’s Catholic University. Shopkeepers say the import tariff hikes have forced them to hike prices by up to 20 percent.

Dos Santos, one of Africa’s longest-ruling leaders, has been accused by critics of widening a dangerous gap between the rich and the poor that risks causing social unrest.  Santos estimated last year that 36 percent of Angola’s 18 million people live in poverty, but dismissed the risk of income inequalities causing social upheaval, saying most people supported the government’s policies.

The UN High Commissioner for Human Rights, Navi Pillay, had a different view, urging Mr Dos Santos to reduce the inequality gap and warning about the high cost of living.

The average national salary in 2010, the latest year for which official data is available, was around $260 per month. In the finance sector the average was 10 times higher and in the oil business over 20 times higher, or around $5,400. 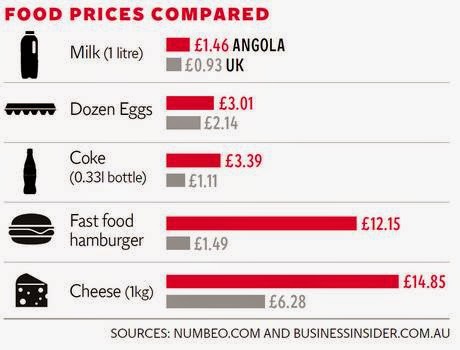 Posted by ajohnstone at 2:28 AM