Nigeria, despite being notorious for corruption, had no difficulty raising $1bn by issuing sovereign debt. The bond was oversubscribed. High quality global journalism requires investment.

Across Africa billions of dollars have been misspent and diverted into overseas bank accounts. Clinics have been left without medicines, schools without books, villages lack electricity, roads are potholed. Potential is squandered and hopes are dashed. So when investors buy bonds sold by sleaze-ridden governments, it is surely as dubious as giving a bottle of whisky to a known alcoholic. It is not against the law. But at best it is unethical and immoral, and the giver is complicit in the consequences.

What makes the act especially questionable is that it has happened before. Investors helped make Africa a debt junkie in a process that began 50 years ago. It is easy to forget that independence from colonial rule was accompanied by an optimism and a wave of lending reminiscent of the current enthusiasm about the so-called new Africa. Africa’s leaders proved deeply disappointing. Foreign lenders nevertheless indulged big men and their vanity projects. Grandiose power schemes, dams that silted up and irrigation projects that failed – few if any were viable or profitable. All were dependent on foreign loans.

The bubble had to burst. By the early 1970s the continent was unable to service its external debt. Arrears mounted, defaults became common. By the 1990s, Africa was in effect bankrupt. Even then, western governments continued to indulge some of the most extravagant borrowers, such as President Mobutu Sese Seko of Zaire, whom they saw as allies in a cold war in which Africa was a theatre of conflict. But it became clear that the debt burden was unsustainable.

Nigeria, one of the beneficiaries of the Millennium debt relief, decided to borrow afresh, and became one of the first African countries to issue a sovereign bond, followed by a score of other
Foreign investors have piled in, pursuing profit but avoiding responsibility. They do not demand transparency in the award of contracts to the projects they fund, nor do they monitor implementation. “We are competing with China” is an oft-heard excuse from the investors – suggesting an approach that excludes ethics but fails to explain their conduct when they had the continent to themselves. “Anyway,” they add, “why should Africa be singled out? Why subject it to scrutiny not applied to other corrupt borrowers?”

Can Kenya, for example, which is planning a $2bn bond issue, be trusted? Two massive scams that cost the country billions, based on bogus export claims and false invoices, have gone unpunished. Questions are being asked about construction of a $2bn Kenyan railway, with contracts that lack transparency. Will Nigeria’s bond be spent wholly on rebuilding the decrepit power system as promised? Or will a slice go the way of the $20bn the state-owned petroleum company cannot account for?

We have been here before but no lessons have been learnt. Two things are certain: the bond buyers will make their money on their loans, irrespective of how they are spent, the continent’s elite will take their cut – and Africa’s long-suffering people will pay the price. 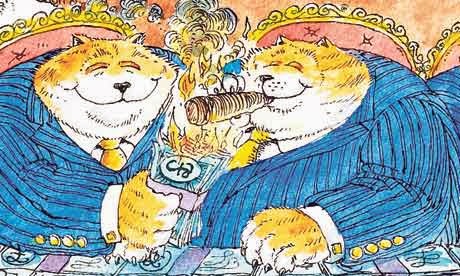 From the Financial Times

Posted by ajohnstone at 3:28 AM