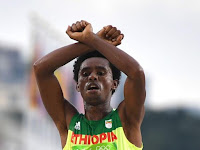 Ethiopia’s state-owned TV network has refused to broadcast footage of one of its most successful Olympic athletes crossing the finishing line or receiving his medal after he staged a political protest against oppression back home.

As Feyisa Lilesa crossed the line on Sunday he raised his arms to form an “X”, a symbol of defiance that has been used by the Oromo people in Ethiopia as part of political protests against the government. At a news conference following the race, he reiterated his defiant message."The Ethiopian government is killing my people, so I stand with all protests anywhere, as Oromo is my tribe," Lilesa said. “My relatives are in prison and if they talk about democratic rights they are killed.” Lilesa had gone from a national hero to a man who might not be able to return to his home country. Lilesa was conscious of the danger. He immediately suggested that he might have to move somewhere else. "If I go back to Ethiopia maybe they will kill me. If not kill me, they will put me in prison. I have not decided yet, but maybe I will move to another country," he said.

Most of those who watched Lilesa's spectacular silver medal performance didn't know what that meant — or just how dangerous a protest they were watching. Lilesa was protesting the Ethiopian government's killing of hundreds of the country's Oromo people — an ethnic majority that has long complained about being marginalized by the country's government. The group has held protests this year over plans to reallocate Oromo land. Many of those protests ended in bloodshed. According to Human Rights Watch, more than 400 people have been killed since November. In addition to those killed, many Oromo protesters are currently languishing in prison.

The plight of the Oromo and the Ethiopian government's use of force against civilians have received some attention recently, but nothing as prominent as Lilesa's defiance. Earlier this month, the U.S. Embassy in Addis Ababa said that it was “deeply concerned” about the most recent killing of protesters. But because Ethiopia remains a U.S. ally in the fight against Somali Islamist group Al-Shabab, American officials have been reluctant to offer any further condemnation.