Sub-Saharan Africa’s children are being left behind amid global progress in poverty reduction and will account for nearly half of the world’s poor people by 2030, raising the risk that the continent’s young population could become a “time bomb”, a new study has found. Many African countries have young populations that have the potential to translate into a fast-growing workforce and boost economic growth, creating a so-called “demographic dividend”. However, if those young people do not have skills or job opportunities they can instead become a burden on governments.

By 2030, more than 147 million African children will be living below the $1.90 per day extreme poverty threshold, according to a report published on Wednesday by the UK-based Overseas Development Institute. The continent will account for almost 90 per cent of extreme poverty among children, up from 50 per cent today, implying that progress in other areas such as ending malnutrition and early marriage will be slow. If African governments fail to harness this generation of children to accelerate growth and drive development, they could become trapped “in a vicious circle of marginalisation”, the study warns.

“The current trajectory is not encouraging”, said Kevin Watkins, executive director of the ODI and co-author of the report. “Africa is losing out big time on growth in part because of a failure of governments to tackle the inequalities and invest in the human capital needed to accelerate the demographic transition.”

Africa is also yet to achieve the “demographic transition” seen in Asia, where increasing rates of child survival were eventually accompanied by declining fertility. As a result, a growing share of the world’s children are being born into African countries that have the slowest rates of poverty reduction, according to the report. The report says that Africa’s average birth rate is 4.7 children per woman, twice the number in South Asia. It also found that women in many African countries were having more children than they wanted to as they could not access contraceptives. For example, in Nigeria — which will account for 6 per cent of births globally between 2015 and 2030 — the fertility rate is 15 per cent higher than it would be if women had the number of children they say they want.

African governments are generally behind the curve in addressing the gender imbalances that keep young girls and women from managing fertility, Mr Watkins said: “There is no starker illustration of these disparities than the conspicuous failure of most African leaders to tackle the scourge of child marriage — a practice that exposes young girls to enormous risks and drives up fertility rates.” The report also argued that tackling inequality through education — for example, by keeping poor girls in school longer — could help bring down fertility rates. Rwanda was an exception, the study noted, citing data that pointed to a fall in fertility rates from 6.1 to 4.6 births per woman between 2005 and 2010, partly due to an increase in contraceptive use amid rapid economic growth.
https://www.ft.com/content/038b3bba-69e8-11e6-a0b1-d87a9fea034f 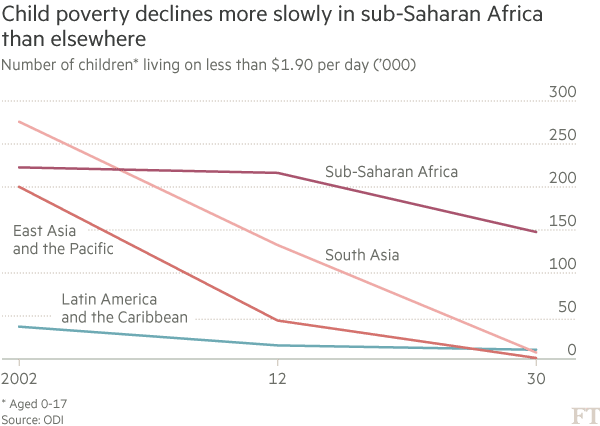 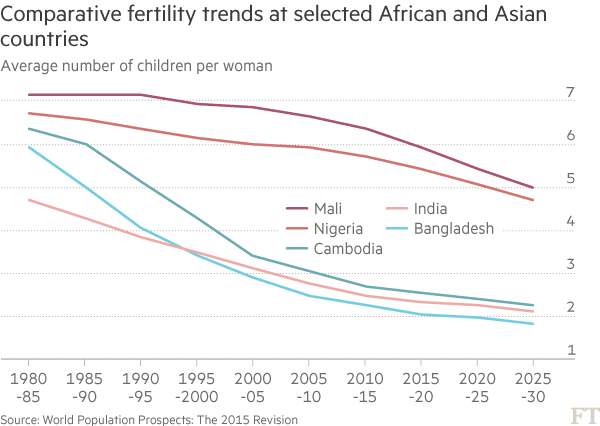 Posted by ajohnstone at 8:25 AM